James Pierce
@InvisibleJim1
Five years ago incredible scenes as we supported @NickySpinks on her #bobgraham round record attempt. This pic does…
1d • 5/04/2020 • 9:57

Dark Peak Fell Runners
@dpfellrunners
RT @peteblandsports: As we begin another month, our shop remains closed and the vans remain off the road. So online it is and another disco…
2d • 4/04/2020 • 8:47

Dark Peak Fell Runners
@dpfellrunners
@lliongerallt Its Rob Davidson, member of our running club. Good work Twitter. Follow me and I can dm you and share details
8d • 29/03/2020 • 13:04
Scroll down for more ... 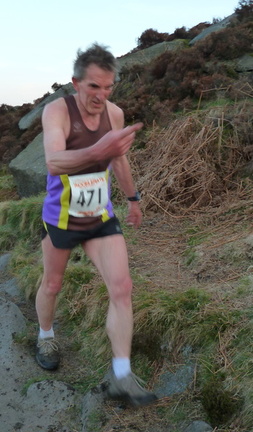 A trail run around Rotherham following the Rowbotham's Round Rotherham footpath mostly over farmland and rural areas on sign-posted paths, bridleways and roads with very little ascent. The weather was about perfect for running being a bit chilly early on and warming up as the day went on. Mostly clear skies were augmented with some friendly clouds that never once threatened rain.

Mick Cochrane was the first MV70 finisher out of 12 starters (2 DNF and 10 finishers).

There was a new Race HQ this year at the Manvers Waterfront Boat Club at Wath upon Dearne north of Rotherham. There was the option to sleep at the event centre on the Friday night to avoid a very early morning and travelling prior to the race. I opted for this and slept on the floor in a room containing another runner who was snoring like a rather old tractor long overdue for a service struggling up a particularly steep slope. The lights went on early on the Saturday giving plenty of time to get ready and watch the 6 am wave of starters depart. They were all reeled in and overtaken later when I set off in the 7 am wave of starters.

The weather was ideal for running - a bit chilly in the morning at the start but warming up later with clear skies and no rain. It was dry underfoot facilitating fast running. Indeed, nearly 17 minutes were taken off the course record. The new record of 6 hours no minutes and 52 seconds was set by Ben Hague of Rotherham Harriers and AC. This was more than an hour faster than the finishing time last year in 2017.

This was the last race in the Runfurther 2018 series.

Well done all, please note that Jim Fulton is no longer a member of dark peak fell runners, is listed as FRA on the results.

Well done all, please note that Jim Fulton is no longer a member of dark peak fell runners, is listed as FRA on the results.