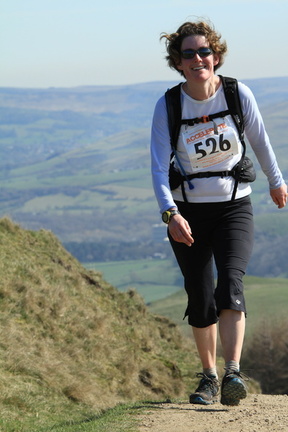 From the ridiculous to the sublime (or vice versa?). Snake Inn Alternative, 15 Jan 2014

After last week's debacle, it was a welcome return to Kinder via Fairbrook Naze, whereupon the weather closed in with a vengeance and we were treated to quite the longest, sloppiest and bog-ridden line across the plateau that Big Bob could muster. Both he and, rather more impressively Pete G, managed to bury themselves a couple of feet deep in the slop, whilst the rest of us trogged around aimlessly and the good Cap'n and the Safety Officer exchanged tales of the First World War. Don't ask.

When it seemed that it could get no worse, we alighted upon the southern edge path, somewhere to the east of Crowden Tower, where Bob and Dave Bollinger quickly declared themselves much too wet and cold for an extended whisky stop (for shame). Fortunately sense prevailed amongst others of our gratifyingly large party of 18, whisky and jelly babies were shared, and thus fortified against the elements we set our faces towards Grindsbrook. The line wobbled a little, but the weather and running improved immeasurably, and we made our way Snake Inn-ward via a precipitous descent off the north edge and a bout of chest high heather hopping, before the final descent to Fairbrook. One of those nights where the more we ran, the better it got ... with a couple of pints of Moonshine in the Snake Inn afterwards merely the icing on the cake.

There is a map of this run, view the post to see it
Permalink | Closed to new comments | Last updated on Thursday 16th January 2014 at 9:46am