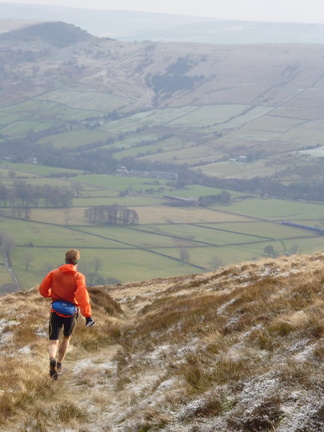 A perfect night, weather-wise! Freezing cold, a howling north-westerly and later on a complete white-out blizzard. What more could we ask for on the Capt.'s 70th birthday run! We set out from the pub, avoiding the field, which we never, ever run over and nearly getting killed on the short stretch of road (if the gamekeeper is reading this) to the access gate. From here in true Harmer form, we struggled through the usual waist high heather up to Howshaw Tor, losing Clive on the way, as is the norm! The forecast blizzard made an appearance at this time, rapidly turning into a bit of a white-out. From here, we stumbled down to the stream junction on Bradfield Gate and then back up the top of the Edge. At this point it was snowing like the Arctic and the Capt., showing his age, took us down the Foulstone path instead of the edge path i.e. east instead of south. To be fair on the old bugger, he did correct this grave error after he'd adjusted his monocle and put the compass the right way up and so we returned to the top and continued in the ever worsening blizzard to the Cakes of Bread, where whisky and truffles were taken and a hearty rendition of Happy Birthday was given. From here, it was but a long trudge back to the pub, avoiding the field, as we always do! Unfortunately the S11/S32 softies decided that the weather was too bad for them to stay and join in the birthday celebrations, so they buggered off leaving it to the S6 hard men and Tom Westgate, to attend the party! Driving back, it had to be said, required a change of underwear (on my part at least). However, we managed to celebrate the old Scrote's birthday with a pint of Belgian Blue at the Nag's Head, where it was merely pissing down!

There is a map of this run, view the post to see it
Permalink | Closed to new comments | Last updated on Friday 15th December 2017 at 12:44pm