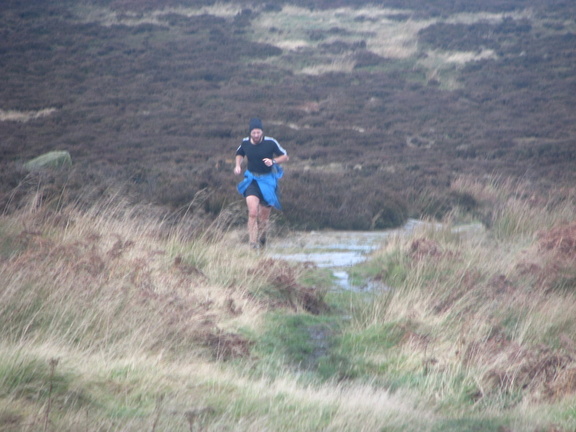 Hot, sunny and a cold blast

Moz had left by the time Stephi, Toria and I had arrived at the Nag’s Head in Edale for Moz’s birthday run on his classic route over Kinder. The 9.45 starters of we three and Andy, Tim W, Willy and others headed up the zig-zags in the bright sunshine to find the edge path to Druid’s Stone. There was ice, snow, an achingly cold easterly wind and even spectators in the form Dave Lockwood, Bob Marsden and Jeff Harrison, to contend with. However, following the advice given by the spectators, i.e. “Turn left and head for the snowy tops”, Andy and I followed a small trod to the Blackden trig and beyond before descending quickly (we thought) to Blackden where we met Tim W at the stile checkpoint. Willy followed a bit later but soon passed us up the hill out of Blackden. Toria and Stephi were well ahead and on the way up to Seal Stones, having used a very fast route from Druid’s, “sprinting” (to quote Stephi and Toria) along a path recommended by Fi over the top before dropping to Dean Hill and down to the stile. By this time the later starters (10.00) led by Dave and then Kirsty, were catching up and passing us along the edge path towards Fairbrook. Then, decisions, decisions, where to cut off to reach Kinder Gates? We reached a reasonably flat bit above Upper Seal Clough and followed the footprints in the snow generously provided by Kirsty’s team.

Though we arrived about 50m upstream of the Gates, we had crossed a few groughs and the possibility of repeating the almost groughless route often used on the Triple Crossing which finished about 50m downstream of the Gates, came to mind. Worth a practice run? From the Gates, we followed the river into the sun. Criss-crossing the icy water was a bit tricky but it took us to the plateau top which had frozen sufficiently hard for us to skip over to Crowden. A lower trod beneath the rocks took us to the edge path for Moz’s Knoll. Even though the sun was beating down and sunbathing might have been considered, the wind was almost violent, blowing us off the track and thoroughly chilling us. Relief came when descending into Crowden though I managed to fully immerse my foot in a deep bog at the stile. To add to the fun, the string on my compass somehow became entangled on the fence. That was truly a first for me; has anyone else suffered from this form of entanglement?

Having been well chilled on Moz’s Knoll, the sheltered, sunlit climb to the ponds resulted in overheating. However, the moderate wind at the ponds restored body temperature and, as always, the view of Edale was most welcome even though the descent was a bit steep to the even more welcome Nag’s Head.

Well done to all those doing this classic run and many thanks, Moz!