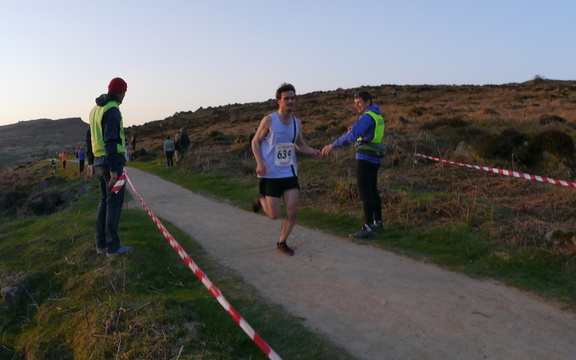 On a quiet but cool night a small group of 8 warts headed up to Hearn stones and on to Dog rock, which we slightly over shot; while debating the finer points of this behold a vision appeared heading towards us, as it grew closer it was revealed to be the person formerly called the safety officer come to see we were still all right, Mark himself. After a cautious descent into Yellowslacks Brook we trundled happily along but alas some of us were too low to find the pond at James Thorn and had to climb back up to find Dave, Bob, Moz and John already there. Still a whisky stop cleared the mind and encouraged the spirit as with the clag descending we found the Trig point on Higher Shelf stones and sped home only for Moz to struggle to switch on a spare torch which had all of 2 buttons. A grand outing that finished after 9 pm with all accounted for ,including new guy Mike.

There is a map of this run, view the post to see it
Permalink | Closed to new comments | Last updated on Friday 23rd February 2018 at 6:58am