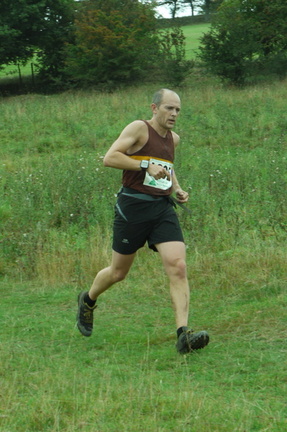 Rather amazingly in the calm, warm and humid Wednesday evening, the midges were rare for the outing from Fairholmes. However, this was little comfort as we fought off the flies every time we stopped, instead. We were therefore encouraged to keep moving as we left the Lockerbrook Farm using the Ian W firebreak through the forest. Today’s first mission was to find the cairn in the centre of the bowl below the Alport ridge and south east of the Castles as on Nicky’s Rowlee Zig Zags summer series race. A long trek with not too much running through the tussocks, found a small group of we stragglers overlooking the edge on what appeared to be the perfect line with the cairn directly below us. Perfection, however, is rarely achieved and the near vertical craggy drop emerged as we attempted the perfect line. Discretion therefore selected the route, around the edge of the bowl rather than down the cliff.

Mission achieved, the cairn was somewhat underwhelming and a few stones were added to enhance its rather feeble stature. Here, the fast group, including new member Joszef, was led by Tim T and they sped off, eventually to Green Clough. The next target for the stragglers was the canyon within the Castles, and definitely not the Tower itself. So, we enjoyed a long contour around the few rocky lumps leading to the canyon. It seemed as if someone had been busy polishing each blade of the yellow parched grass on the hillside as we slipped and slithered over it on the line of the contour. It was even a relief to be on the rocks and boulders where movement was a bit more secure. To help negotiate our way through, the Cap’n’s instructions shouted from the top of one of the rocky hillocks, were “Just put one foot in front of the other and you’ll be alright”. So we did, and found ourselves, despite the previous intention, ascending the Tower where, amid the distribution of jelly babies etc., the Cap’n announced that the next winter Crookstone (the 70th) would include a jaunt up it. Thankfully there were provisos, i.e. this section of the route would not be used if there was any significant ice and or snow. Remarkably, some of the cynical, struggling stragglers’ group suddenly remembered their December diary entries and announced that they would be busy that day.

Escaping from the Tower and the canyon, rare birds were seen by twitchers Chris and Clive. From the perspective of a none twitcher who was head down and concentrating intently on not falling over rocks and tussocks, they all had wings and were flying. This sighting and the arrival at the edge path motorway, encouraged more flying (at least that’s what we thought we were doing) back to Fairholmes. Spreading out to race (?) back, we took a variety of ways, including the Ian W and adjacent firebreaks, the “new” plantation to Lockerbrook farm, the long dog’s leg (for extra training, you understand) to the farm and a direct route to the car park.

Analysis of the outing, of course, took place in the Ladybower along with the Dark Peakers from the Bamford Gala race. Who had the best time? Probably, everybody. All round, it was a splendid summer evening experience.