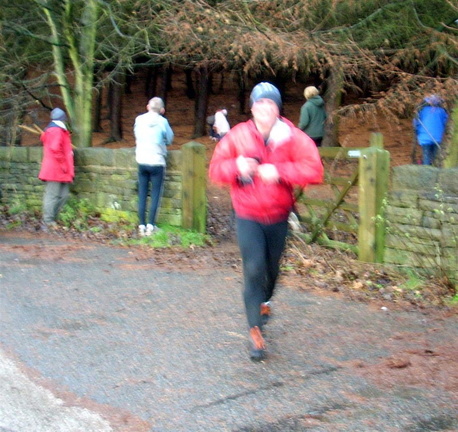 Memories of significant injuries linger and sometimes there is a curious urge to revisit the incident site. So it was at this Blackden outing, that the Cap’n and Chris planned to peer down into a crevasse explored accidently by the Cap’n two or three years ago. This “exploration” resulted in a serious injury needing a few months recovery, not to mention the effort required at the time by fellow Warts to extricate him from the gaping chasm. Chris was also keen to see whether the crevasses were widening and whether we were in imminent danger of a further landslip. You see it’s well worth joining the Warts for these possible earth moving experiences.

Before this nostalgic visit and as we prepared to set off from the Blackden lay-by, the spectacle of a series of racing motor bikes going wheely fast encouraged we eight stalwarts to rapidly escape to the hills. It was noticeable that the bridge over the river was holding back a tangle of branches following the recent very heavy rain; the bridge fortunately had remained sound so no wet feet, yet. A further short stream crossing however provided a fine opportunity to indulge in a bit of foot wetting, possibly a bit disturbing for Clive who appeared in a sparkling new dayglow pair of Innov8’s to illuminate his way round in the dark.

However, both the shoes and Clive survived the crossing unscathed so we could then follow tonight’s junior Warts’ section of Fi and Eoin up to Seal Stones. The descent to Snake Bridge was via Bob’s Spring though, sadly, Bob’s injury (hamstring, from descending the path to Slippery Stones last week) prevented him from joining the outing. With the danger of path running, therefore, foremost in our minds, we duly avoided the Gate Side Clough track and went directly over Seal Flats to the bridge. It did prompt the thought that whoever considered this bit of land to be flat must have had a distorted idea of flatness as, now in the dark, we ploughed through heather (some burnt), bracken, swamp and ditches all combined with precipitous descents. At least we avoided the path so it was really enjoyable. A proposal to reverse this descent was suggested and enthusiastically taken up for a later outing; make a note in your diary.

An equally steep route took us up to Oyster Clough though the gem of tonight’s outing was the scramble over the broken rocks to the edge of Cowms Moor; hands, knees and gasping lungs were much in evidence. We were now approaching the crevasses so the Cap’n took the lead, very carefully and nobly. At least if he fell in one, we would know to avoid the area. No such accidents but, shining a light down a very deep one, suggested it may not be too long, in geological time at least, before the next landslip. We agreed that jumping in unison on this delicate feature would not be advisable so we left softly. We’re not sure of Chris’s verdict on whether the crevasses were widening but, critically, we survived without incident to allow us to enjoy the hospitality of the Ladybower where all agreed it was a classic Warts’ do!