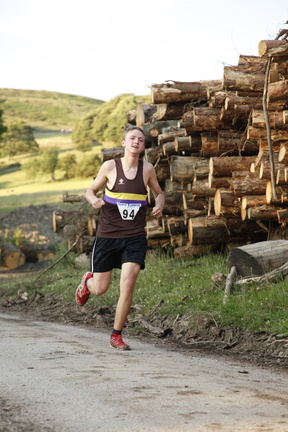 A need to move his furniture had landed the Cap’n with an injured knee which prevented him from appearing at the Warts’ outing from Rowlee Bridge on the last Wednesday before the clocks changed from summertime. So, the route was planned by Bob who suggested one with more path running than was typical of the Cap’n’s routes. Indeed, there was even some road and path running from the bridge on our way to the Jubilee cabin. After a regroup, a long contour took us, initially on track, paths and then on tussocky ground, to the Blackden valley which provided some shelter from the increasingly strong and buffeting north westerly. We were back on a path but what a path! Dignifying it with that name could lead to accusations of misrepresentation. Nevertheless, it was a way, of sorts. The route up the stream was runnable but only in short stretches, otherwise, there was rock, bog, bracken, running (which was more than we did) water and scrambling up the steepening “path”, climaxing in a near vertical climb through heather and loose scree to the very wild and windy edge path. Bob’s plan was to continue on the edge path and then leave it at a patch of peat to reach the Blackden trig. However, after the regroup at the head of Blackden, there was a drift to the Three Minute crossing and two groups emerged, one on the edge path and the other over the tops and, specifically, not on a path. The wind was strong on the edge and tested our ability to run in a balanced way. It was like being drunk without the benefit of alcohol. Whichever direction we moved in caused some sort of control effort, into the wind almost stalled us and, with the wind behind, we moved too fast for any safe passage and with sideways on wind, we developed a leaning gait which any corps de ballet would be proud of. The trig and the pavement around it did not give much shelter although, to be fair, it gave us the very limited opportunity to run unhindered by any underfoot hazards. And then……it was a rush down the traditional Crookstone Knoll Race descent, mainly on a path until the final bracken covered slope. Isn’t it annoying to have both feet caught together by the bracken resulting in a need to leap upwards to escape the stuff and then to find you’re hurtling out of control into yet more bracken.

Having survived all that, it was the general view that, despite the path running, this outing was worthy of being classed as Warty!

There is a map of this run, view the post to see it
Permalink | Closed to new comments | Last updated on Thursday 25th October 2018 at 4:52pm