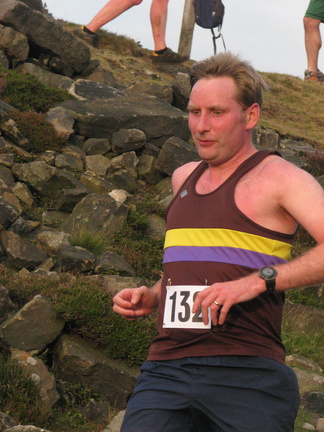 Who would have thought it? It is possible to find the most challenging tussocks almost within the Sheffield City boundary, even waist high ones with the added attraction of bogginess in between them and, of course, in the darkness and cold (it was Wednesday night after all). All this no more than half a mile from a road which can count as some sort of civilisation to non-Dark Peakers. Bashing through these tussocks, the level of grumbling rose to a group groan only to fade as the now almost routine navigational discussions, notably “we’re 180⁰out”, lead to a general dispersion of the larger than typical Warts’ group. Suddenly there were runners ahead, behind, to the side and above us, all apparently going to Boot Folly. On the surprisingly steep climb (no tussocks by now) we were encouraged or harangued, I’m not sure which, by the birthday boy as we approached the Folly. Having been sheltered from the wind in the valley we had just climbed out of, it was a bit of a shock to be chilled by the south easterly though, only briefly, as we then entered the eerie rhododendron tunnel near Sugworth Hall. Needless to say, the wind caught up with us approaching the ruined cabin on Ughill Moors and, from thereon, it was to be an almost constant companion for the rest of the night’s outing.

Some wide very runnable tracks took us past Moscar to the start of Strines Edge where we declared Cakes of Bread to be the whisky stop. It’s a long way on Strines Edge before the left turn towards, but not to, the edge. Here we had the pleasure of meeting the Sportsman roadies who had been temporarily chucked out of their regular slot there and had been forced to take to the hills instead. We, thankfully, were now on proper moorland fully exposed to the very bracing wind; it was double Buffalo and double thermal vest weather for me and I was still cold. Such is the independent spirit of the club, an alternative stop was called by a breakaway group, at a sheltered grough nearly at Cakes of Bread. Our lot stuck to the original plan for whiskies, jelly babies and raspberry ripples, and a rendering of Happy Birthday to the Cap’n. The race to the Strines pub was now on and it was illuminating to see so many points of light spread out across the Strines Moor. In all of these random routes, surely the optimum one must have been found. However, not for me. On the final track up from Strines Dike, I always look out for the 15cm steel bar sticking up in the path but having thought we had passed it, promptly fell over it with a pretty spectacular dive. I survived!

The warmth of two fires at the Strines Inn and the presence of the roadies was good enough to take off the chill of the previous couple of hours. In this convivial atmosphere, the outing was declared to be “interesting”.