Hundall Cricket Club
@HundallCC
Please distribute this around your members. We hope to see as many of you there as possible! @nderbysrc @WWobblers…
1d • 24/01/2020 • 15:33 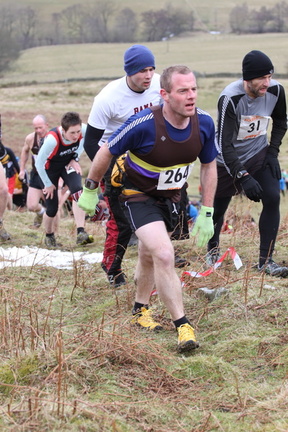 The snow had arrived on the tops and, not unexpectantly, the Snake Road had been officially closed with barriers at the Ladybower traffic lights. The planned outing from the Hagg farm layby was therefore changed to the Ladybower car park where about a dozen frozen Warts gathered. The immediate discussion there was on the number of layers of underwear, a fine introduction for new member Sam to overhear. Nevertheless, or perhaps because of this, he stayed on and joined the run.

And, there was more running than expected, possibly because of the Capn’s absence due to a heel injury. Bob had taken over route duties with the first climb being from the back of the pub up the track towards Ladybower Tor. Since the last time I used this zig zag track, it has grown both wider and, in places, narrower and deeper. Thoughts of why this had happened were quickly dispersed by the general snowy steepness of the climb and by the junior Warts ahead actually running uphill. Generously, they did wait at the path crossroads (crosspaths?) at Whinstone Lee Tor before dashing off again on the lower edge path and then down to the shelter barn. Some Warts then decided that the next climb to Pike Low was a hill too far, announcing an alternative up the Mill Brook valley towards the pack horse bridge. The rest of us went to the summit following the snow cleared line made through the heather by the juniors. A very brief stop was made there, taking no whiskey but some sweeties including, possibly for the first time, some Rolos, and then a steep and slippery descent by the wall encouraged us to plough through the heather to get some slightly improved grip. A conversation on the enforced change to the route of this year’s Edale Skyline (around rather than over Mam Tor summit) diverted us somewhat from the grinding climb to Salt Cellar through snowy tussocks, heather and boulders. A call for lights out gave us a grand view of the stars in the moonless sky and an appreciation of the unsurprising benefit of head torches! Then, back to running, over relatively hard packed snow back to the pub via the rather tricky descent down the zig zags.

Maintaining the initial theme of the outing, discussions in the pub drifted around to underwear again, old and holed thermal vests, cycling tops, inner and outer gloves and mittens and so on……… It’s possible that these mind expanding conversations were driven by the cold (it was, after all, a feels like temperature of about -9⁰C) and the availability of Farmer’s Blonde at the Ladybower. Nevertheless, and, in a moment of absolute clarity, it was declared to be an excellent night out.