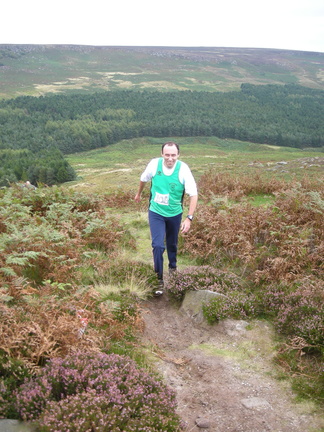 After last week’s weather modified venue, the Warts returned to the Ladybower and to the now compulsory (?) annual visit to Priddock Wood. Suspicions that this would be the shout for the outing, kept the numbers to a reasonable level to enjoy the immediate immersive experience of Ladybower Brook in full flow. This, of course, was just a foretaste of what was to follow. Desperate shouts of “Where’s the path?” and “Below!” created the right sort of atmosphere for a classic PW outing. The challengingly steep climb has everything, mossy slime, deep bilberry, tree roots, rotten tree branches which break off at maximum criticality, large rocks, loose stones and, for at least one Wart, a bottom clenching overhang. Some made better progress than others with the Cap’n unusually resorting to gloves, even gardening gloves, to enhance his grip crawling up the perpetual climb. The view of head torches forever above us whilst making laborious and what seemed like futile progress reminded me of the Greek myth of Sisyphus repeatedly and eternally rolling a boulder uphill only for it to roll back down near the top. In reality, our “eternity” only lasted about 15 minutes as we reached the bracken covered and relatively level Bamford Moor.

There, the fast running (yes, running, though fast may be a bit of an exaggeration) allowed some relaxation to the point of almost contemplation and expansive thinking. This is dangerous. Clive was thinking of an injury he had received some time ago in this vicinity when he fell, running over the remains of a wall. Whilst he had an elegant encounter with the ground, the generally agreed advice was, of course, not to think when fell running, so we didn’t, as we passed over the vertigo inducing Bamford Edge. As the mist laid its foggy hand on the edge, we headed in two groups for the stone circle on Bole Hill. At the end of the ruined wall “hand rail” which was found, a simple easterly bearing should guide is to the stone circle. However, it also took a bit of technology and the head torches of the other group who were already there, for our group to find the circle where refreshments were taken before the next check point of High Neb.

This time, Chris’s lone head torch light was already on Stanage Edge either to guide or to lure us there. Our collection of types of terrain encountered so far was added to with the moor crossing to High Neb. The tussocks were in fine condition and were enhanced by the running water between them. More bracken and a rocky scramble just about completed the full set of Dark Peak terrain. Our knowledge of place names was improved by being reminded that there are two named rocky outcrops north of High Neb, i.e. Crow Chin and Crows Chin Rocks which are about a mile apart. Descending from between them there was a plan to reach the stone circle near Hordron Edge. When the Warts have an inkling that the finish is not too far away, there seems to be a tendency to disperse and this night was no different, resulting in only one reaching 100m from the stone circle. A rush across Cutthroat Bridge and down the partially paved track took us quickly to the pub. Fortunately, one Dark Peaker, Tom W (good to see him), had kept it open for us by promising the landlord there would be about a dozen customers arriving soon. Farmer’s Blonde was on, the discussions were lively and two members were disappearing to Istanbul and Alicante to spread the Warts’ message overseas. Don’t worry though, they expect to be back for next Wednesday’s outing.

As always, Priddock Wood never disappoints, we had a wonderful adventure!