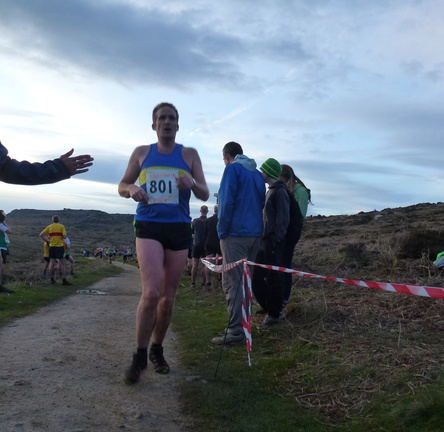 There were ten togged up Warts ready to go from Strines. A fine array of waterproofs was on display though there were a couple of brave be-shorted athletes thereby putting any track suited Warts to shame. The general and dismal impression of black and shiny clothing was fortunately illuminated by Eoin’s new but old model fluorescent green shoes not to mention Moz’s routine fluorescent top. There was plenty of rain not only during the run but over the previous three or four days so streams were in full flowing form. Having crossed the moor, we faced the traverse of the upper reaches of Abbey Brook which appeared more formidable than normal with the general surrounding mirk and the foaming brown cascades. A steep slippery descent brought us to the Brook where youth (Fi) and age (the Cap’n) combined to provide helping hands for the rest of us to wade across. A scramble to Beresters Tor brought welcome rest and refreshment. Of course, our epic journey so far was recorded in the log there.

A repeat of the slippery descent, the refreshing stream crossing and the scramble inspired us to reach Low Tor for the now traditional dash to the block house and then on back to the pub and its very welcome roaring fire (in June!) which was also shared by the water Warts wild swimmers. The post run discussion included next Wednesday’s Crookestone Crashout and whether a return to the original route of the Knoll, trig, Knoll would entice any youngsters out to break the old all-time record (Malcolm Patterson, about 29 minutes). This is not to say that veterans should not also attempt the record (again about 29 minutes) currently held by the then V40 cap’n. Cock-a-Hoop driven reminiscences of the glorious (we thought) feats and times of ancient fell runners caused the younger ones to start leaving the pub, presumably because they couldn’t comprehend such magnificent performances but surely not out of boredom? Nevertheless, we did all agree that wet as it was, it had been good to be out and by the way, there was a two hare and one-person count, thus confirming a good outing.