DPFR Juniors
@DpfrJ
A favourite destination of many a Dark Peaker and the junior races through the village have been the scenes of nume…
28m • 21/10/2020 • 9:13

Dark Peak Fell Runners
@dpfellrunners
RT @cbdgb1: A wee wander up Scafell Pike today with a spade and brush for @fixthefells and @NTScafellpike wondering why no litter. Bumped i…
2d • 18/10/2020 • 19:20

Dark Peak Fell Runners
@dpfellrunners
RT @TimBirchWild: Vigo our incredible #BeardedVulture has finally left our shores. The French Alps where she was born is calling her home.…
4d • 16/10/2020 • 13:57 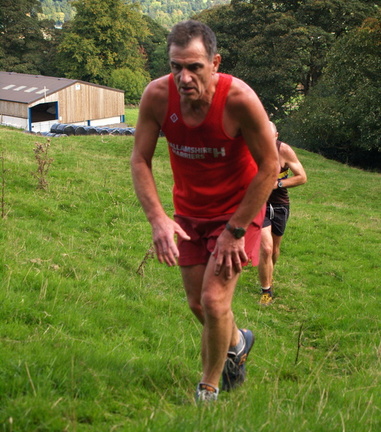 Could we have been running too quickly from Broomhead to the upper footbridge over Oaken Clough? The sprint along Dukes Road and the Land Rover track had brought us to there after only 45 minutes so it was too early to head back to the cars. This was despite Phil taking the younger Warts on a one mile detour to somewhere near Flint Hill, for a bit of extra training, you understand. The background to this concern about time, resulted from last week’s outing from King’s Tree to Bob’s shed and Margery Hill which meant that most of us arrived home at about 10.30pm. (Note that refreshments were nevertheless taken.) Hence tonight’s frolic was designed to be shorter and, for a bonus, the girders were to be avoided to prevent any serious encounter with bracken which was in full magnificent bloom.

So, no long outing and no bracken. Having reached the Oaken Clough footbridge early, a route was decided upon to go from there to Fox Stones and then back via the shooting cabin, only a short distance, thereby bringing us back to the cars in reasonable time. The logic, as was plain to see, was impressive. We had a good line over the moor to Stainery Clough which was crossed without too much inconvenience, just a few slippery rocks, a small rock fall and a bit of bracken. Crossing more moorland over some old burnt and fresh heather brought us to Ewden Beck. Here we were treated to the sight (in torchlight, of course) and sound of a delightful waterfall fed by yesterday’s downpour. The crossing was a repeat of that of Stainery Clough, only bigger this time with the bracken above our heads. A little bit of open ground to Fox Stones provided some relief together with the whisky and jelly baby refreshments taken there.

It was only about one kilometre to the shooting cabin so it was thought we could make up for some of the time lost crossing the rivers. The logic, again, was sound enough but……….. the blooming bracken began to eat into that valuable time. The whole outing was planned to take 90 minutes and before we reached the second crossing of Ewden Beck, there were only 9 minutes available. We fought bravely through the over-the-head bracken and the clouds of insects interrupted in their slumbers by giants with one bright shiny torch eye charging through their homes. Sliding feet first (if you were able) through trees, clinging on to branches which inconveniently snapped, we were able to have another crossing of the Beck. This time we doubled our enjoyment by reaching an island which, by definition, allowed an extra dip in the cooling Beck. From there, we climbed uphill through the dense bracken which seemed to close behind us as we forced a way through giving any followers no advantage. There was some relief from a short stretch of open ground which deceptively was a deep and unforgiving bog. Such is the determination of the Warts, we nevertheless continued despite this false dawn (I hasten to add that we were not so late!). Encouraged and enticed on by those fortunate enough to have reached the cabin, we set about to cross the stream at the cabin, “there’s a path just opposite”. This last 20m involved probably the tallest bracken on the steepest slope leaving the Cap’n to perform a sort of somersault. The torchlit view of him upside down with legs in the air and framed by the bracken was not something I want to dwell on. We did reach the cabin and then the cars, but late, well over the planned time, and with an overdose of bracken. Ah, the plans of mice and men!

After that extreme bracken experience, a couple of things came to mind. Firstly, the run back on the track was tedious and, after a little while on it, there was a strange feeling of missing the excitement and challenge of the bracken. I’m happy to report that I have now fully recovered from that aberration. Secondly, it was pointed out that this experience would be of benefit for next week’s Hunter wreck night race in that there wouldn’t be the same intensity of bracken. So, the evening’s outing was possibly a form of therapy to prepare us for the race. You never know, it may work. We’ll see next week!

There is a map of this run, view the post to see it
Permalink | Closed to new comments | Last updated on Friday 27th September 2019 at 8:30am