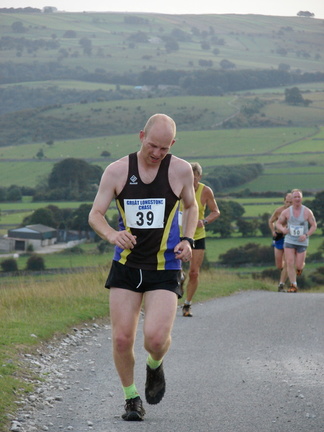 Unusually, the route for tonight was posted in advance through an email from the Cap’n to the Warts. There was a reaction from John D who posted an account of a similar outing two years ago from Midhope. Then, there was mention of slimy, slippery slopes encountered in escaping from Ewden Beck/Candlerush and the need for exhausting high knee lifts to cross the moor to Tom’s tree. Despite this and the current weather forecast for fog and a “feels like temperature” of about -5⁰C, eleven Warts did arrive in the full moon at the bend in the Midhope road. Whether it was because of these reports or because there was whiff of rebellion in the air (the full moon?), there was a change to the pre-planned wander. We were promised more running (gasp!) and on tracks (double gasp!). This triggered a mild comment, surely jogging, not running? On this, there was some degree of agreement though Ian W and his Lincoln friend (both young bloods) indicated their wish to elevate themselves to running and duly ran, adding an extra checkpoint at Mickleden Pond to which the rest of us didn’t aspire.

Bob’s alternative did not disappoint, as we ran (yes, at least we thought it was) up the track by Sugden Clough in and out of the moonlight and into the mist. Happily, there was a crackle and sparkle of frost on the damp grassy track to make the running (?) more bearable. It couldn’t last, of course. We reached the blue matting track which proved to be even more slippery than the aforementioned Ewden Beck escape slope so, to maintain some sort of balance and dignity, walking next to it was the answer. We descended in this way until the serious bog where, thoughtfully the blue matting had been reinforced with a se

ries of very slippery logs. Of the many talents Warts have, I don’t think log rolling is amongst them though, given their many eccentricities it wouldn’t surprise me if there was at least one log roller. Anyway, there wasn’t one in this eleven so we continued our walking at the side of the track and we were almost relieved to leave it and go on to the general heathery bog towards Outer Edge trig. It’s a surprisingly long way there, especially at mainly walking pace; when we arrived no whisky nor sweeties were taken such was our dedication to serious running. To ration the enjoyment of slippage, the return from the trig avoided the blue matting and logs and replaced it with some enjoyable deep and knarly groughs until the track and the moonlight emerged from the mist and, then, full speed ahead. Phew!

The post outing analysis at The Horns confirmed that, indeed we did a bit more running but managed to include some of the elements of a traditional Warts’ run. So, another successful Warts’ trip.