Stuart Walker
@mrstuartwalker
@RunUpIt @dpfellrunners @OrdnanceSurvey One of the great joys of this sort of running. Loved planning mine from Pet…
1d • 19/09/2020 • 18:39 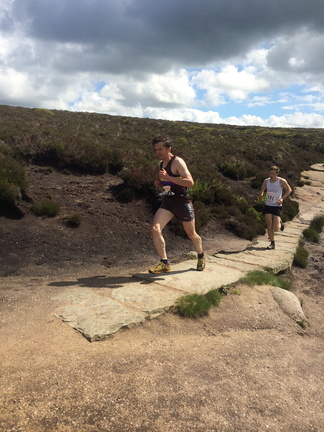 The second 5.30pm outing of the season was called whilst the Landmarks race was being held from The Sportsman. This may have accounted for the limited turnout of five, mostly the Ecclesall lot plus one Loxleyite, all in one car, heroically driven by Clive. We were reminded that the previous Windle Edge early outing raised only four Warts so it was going to be a crowded night, starting in daylight. Bob laid down the challenge of reaching the three sheeper sheep fold without the use of torches.

The deep and crisp but uneven snow extended our visibility, of course, as we enjoyed a spectacular sunset over Manchester way, with a small crescent moon and a bright planet (?). Unsurprisingly, the three sheeper is rarely visited because, I suspect, it’s not marked on every map and, even if it is, it’s not the easiest feature to find. We were on the edge of darkness by Swains Greave and were circling around near the fence and various groughs when we capitulated and switched on torches. About 50m from the fence, Tom almost immediately found the three sheeper under a sheltering bank but hardly visible in the snow. The Cap’n delayed any celebration until we’d climbed up to Barrow Stones (a location for Labrador tea?) where snow drifts made a magical landscape. Shelter from the significant wind (feels like temperature of about -9⁰C and therefore requiring my seven layers) was hard to find but when we did, celebration was limited to jelly babies, possibly because it was too cold for whiskey?

After the necessarily short, cold stop, it was a bit of a relief to descend, temporarily out of the wind, to the Derwent river for the climb to Shepherds Meeting Stones. Deep heather and snow made for a strenuous ascent despite support from the wind. The shout now for Lady Cross was for a bearing of about 25⁰ which happily coincided with the highly illuminated Emley Moor mast. With this as a guide, this was possibly the straightest line the Warts have ever trod. It was a bit disheartening though that, after all the wilderness experience of the Barrow Stones area, we should be seeing and hearing the traffic from the Woodhead road. We persevered and reached Windle Edge which challenges the Doctor’s Gate venue as the most bracing changing spot. Five semi-clad, head-torched men sheltering behind a car was something that travellers over the Woodhead could only imagine to be a hallucinatory experience.

The two and three quarter hours excursion was rewarded with a visit to the local pub thought by one member of the party to have been renamed The Beaters. This was possibly a hallucinatory effect induced by travelling at speed on the way out to Windle Edge on the Woodhead. Fortunately, the pub remains as The Dog and Partridge, though, who knows, it’s not out of the bounds of possibility that it may be renamed.

A cold, snowy and spectacular outing with skilful navigation but beware of the Woodhead hallucinations!

There is a map of this run, view the post to see it
Permalink | Closed to new comments | Last updated on Friday 28th February 2020 at 4:23am