Dark Peak Fell Runners
@dpfellrunners
RT @MoorlandMonitor: ✴️LARGE SHOOT ON MOSCAR TODAY✴️ A shoot has been reported south of the A57 at Hollow Meadows. This is close to popular…
3d • 26/09/2020 • 12:23 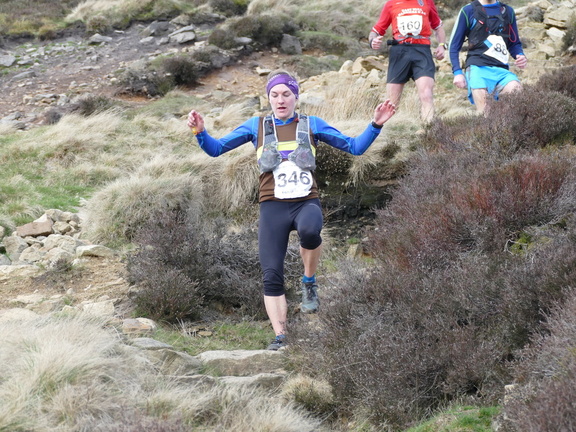 Easing of the lockdown has meant that more exercise outings are allowed and trips to exercise can be further from home, so car use is more acceptable. Bearing in mind these concessions and the need to continue social distancing, some time trials on the fells have been organised, usually over a few days to avoid any crowding, of course.

One such trial was the Kinder triple crossing (thanks, Lewis) which was the course for the first few DPFR club championships. Of necessity, the course had to be modified slightly from the original to avoid entering the potentially busy centre of Edale. So, starting at the Snake footbridge, Kinder Downfall was the first checkpoint followed by Grindslow Knoll and then the footbridge at the bottom of Golden Clough. The Snake footbridge completed the circuit.

After weeks of dry, warm and sunny weather, Andy (H) and I arrived, separately, near the Snake Inn (what has happened to the Inn?) in cool cloudy conditions. Needless to say, I’d checked on the mountain weather forecast for the area where a “feels like temperature” of -1 to +1⁰C was expected. Four layers of clothing were needed therefore, for me. I set off a few minutes in front of Andy to keep our distance on the narrow track up Fairbrook. The weather did not disappoint. The strong westerly wind was funnelled down the Fairbook valley along with quite a downfall of rain to add to the general outdoor pleasure. Near the top where some shelter from the wind was enjoyed and on the way to the first crossing, I was reminded of a rather serious navigational blunder I made on a solo 57A race from Langsett (thanks Tom (W)). Since I had known this crossing so well (?) from many training runs and races, I had not bothered to check the bearing so I relied on the lie of the land, a patch of red vegetation, some narrow sheep tracks and some distinctive peat hags and groughs. The considerable amount of restoration work carried out by Moors For the Future had changed the appearance of the ground. It was disguised by newly planted grasses so that, together with my navigational incompetence, I was on the western side of the Kinder river without knowingly having crossed it! Fortunately it was a clear and hot day so I was able to regain the correct route with the words of G.H.B. Ward ringing in my ears….”a man who has never been lost has never been anywhere”. For this crossing, therefore, I had carefully checked the bearing for the shortest line to the river. As previously, the MFF green disguise was there, if not even more pronounced, so I told myself to keep to the bearing of about 240⁰. Without dipping into my reserves of incompetence, I managed to reach just downstream from Kinder Gates. Good enough; though the line more directly to the Downfall may be quicker but may be strewn with energy sapping groughs, possibly a young man’s line?

Had there been more water in the river with this strong westerly wind, we would have been treated to the Kinder Upfall and a bit of a shower but sadly not this time. So, a quick turnaround and back up the river where Andy was speeding along down to the Downfall. Alarm bells began to ring, just how many minutes had he set off after me? I guessed he was catching up. The race was now really on! Winter in the Kinder river is normally a cold feet experience with deepish, and sometimes slushy flowing water but now there was just a few puddles here and there and some sandy, gravel patches. These were surprisingly deep and cloying so I didn’t want to hang around in these for too long, quick sands had come to mind, maybe this spurred me on! The next decision point was where to leave the river? It was the second major grough on the left, not the cairned one. Fortune was on my side, a thin trod on the right hand side of the grough led almost all the way to the head of Crowden where there was a bit of rough over the rocks (the “Zoo”) to the flagstones leading to the long distant Grindslow Knoll. On the way there, I did not trip, nor did I make any sudden turn but suddenly my hamstring decided it was unhappy and duly told me! Such was the racing adrenalin, I bravely (!?) carried on to the windiest part of the course, on top of the Knoll where staggering around was the only way to proceed until reaching the lee of the Knoll. There had been a few anxious glances back on the route but, so far, no sight of Andy or anybody else. The slalom through the slippery woods at the bottom of the descent provided enough excitement to top up the adrenalin level which was needed for the climb (hard slog!) to the third crossing. There are about three or four stages to this climb, each interspersed with relatively flat (!) shelves where there is a chance to see how the opposition is sizing up. To my surprise, I saw three figures coming up this Unnamed Clough trod including Andy. Gosh, I must try harder but it was to no avail. Over the crossing, one of the three, Glen (B) stormed by, at a safe distance, with a cheery greeting. I followed, but heading then towards Seal Stones there is a fence to cross. Here I dipped into my not inconsiderable reserves of incompetence. Yes, I climbed partly over the fence but forgot to lift my trailing leg over fully and thereby did a spectacular fall causing a sharp pain in a lower rib (on the left-hand side, if you want to know). Gamely I carried on down to the crossing of Fairbrook where Glen was having a quick wash, and on to the finish at the Snake bridge. It was certainly eventful for me but for Glen and for Megan who finished shortly after, it was a routine training outing with no dramas. Andy also finished at about the same time but both of us felt a bit battered by the experience, unlike when both of us had got round a few (many!) years ago in about half the time.

Ah, those were the days!