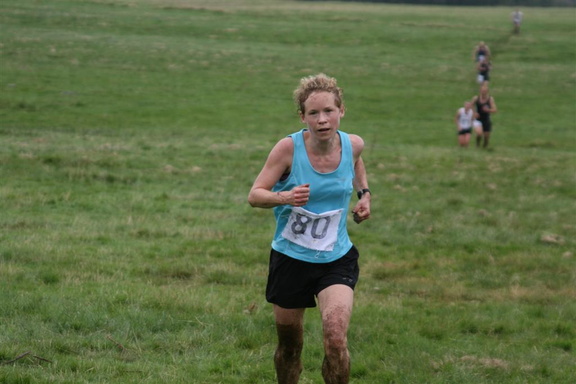 A group of six socially distant but, of course, friendly Dark Peakers (Chris B, John D, Andy H, Clive L, Moz and I) had gathered at the Snake footbridge for the Fairbrook Round time trial on probably the hottest day of the year, the inglorious twelfth of August. This was not ideal for all the group so there were radical mutterings of changing the event to an official Warts’ outing depending on our athletic condition at the top of the descent into Grindsbrook. In true Warting fashion, we set off with this defined (?) plan in our minds though, the condition of our feet was soon on our minds. The crossing of Fairbrook provided a welcome pedicool for those for whom cooling was more critical than the dead weights of saturated shoes. For the others though, red hot feet and possible blisters awaited. Going up Gate Side Clough, there was plenty of time to ponder a unique feature of this TT, i.e. which of the two first checkpoints to choose, (a) Hartshorn or (b) the 604m spot height, and then to decide on the optimum route there. There were at least two 604m “spotters” from our group and more from the three later starters, Pete G, Paul A and Tom W. Having decided on the Hartshorn option, which had taken up some distracting thought off the hot climb to near Seal Stones, it was nevertheless still hard! There are hard men in the Warts who prefer the soft caressing of the deep heather, tussocks, bilberry and the newly planted feathery grasses, to the flexibility improving effect of the rock-strewn track at the head of Blackden. Andy H chose the former, over the direct and high line to Hartshorn but being a softie, I and others plumped for the track and a then a fence-side path to Hartshorn where, very generously, Paul A who had by now caught up, was waiting to check that the rocks were really Hartshorn. After assurance that they were, he sped off to the edge.

Remembering the Warts’ “plan”, I took stock and, in a moment of aberration and over confidence, decided to descend to checkpoint 2, the gate in Grindsbrook. Decisions involving downhill first and uphill second are always less considered than the opposite way when a more realistic choice is usually made. Impetuously and without waiting for the others, as should be typical Warts’ practice, the steep and slippery descent was made. There was even time to sightsee on the way down to assess the exit from the gate towards checkpoint 3 at Fairbrook Naze. There was a hint of a path through mainly rock free feathery grass back up to the edge path towards the jaws of Grindsbrook. This ascent avoided the muscular return back up the fence taken by Paul and it led into the brook for the crossing of Kinder. As Paul disappeared over the horizon, Clive and Moz were descending to checkpoint 2 to make an ascent up the brook itself. So, the remaining pack of Chris, John and Andy had taken the Warting option to head directly from the edge to checkpoint 3, missing the delights of Grindsbrook.

My last sighting of people on this outing was a walker on the edge path but no Warts or time trialists. Following the stream and then my bearing of 320⁰, I wandered over this longer crossing of Kinder with no one in sight, in glorious sunshine on a (very) hot evening. It certainly felt to me as if this was extreme social distancing to the extent that it was even approaching being positively unsociable distancing. The time trial was now becoming almost enjoyable as the Kinder “summit” and its soft relatively even grassland (formerly peat) was reached. Post-trial analysis revealed that the Warts’ party had crossed Fairbrook lower down than, and unseen to me so I reached the Naze unaware of them. The descent on mainly soft peat was thrilling (!) and though I was still unaware of the Warts, they had spotted me. Paul was waiting at the bridge and we both were able to enjoy the silhouettes of the others finishing down the ridge.

Thanks to the RO for a classic outing though the heat was not to everyone’s liking. Roll on the wild winter Warting weather, they cried!