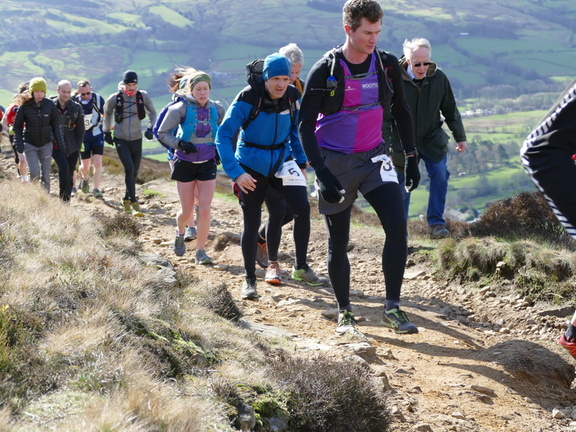 Route description: Starting from the Talybont Reservoir the course heads west to take in a number of peaks south of Pen y Fan and ultimately to the twin peaks of The Black Mountain. It then heads back east but about a mile further north to take in different peaks on the return trip including the rollercoaster ridgeline of Corn Du, Pen y Fan, Cribyn, Fan y Big and Bwlch y Ddwyallt prior to the slippery final descent back to race headquarters.

Most runners were from Great Britain but other nationalities included South Africa, Slovakia, Sweden, Belgium, France and Finland.

There is also a Short Course option which is only 58 km with only 3,000 metres of ascent. It is possible to register for the Short Course or for those feeling the pace at Checkpoint 2 to divert to the Short Course from the Long Course to avoid The Black Mountain, Fan Gyhirych and Fan Nedd.

Transferred to the Short Course: ??

Weather: Dry to start with then rain, light rain and heavy showers. It was quite breezy and towards the end the winds got stronger. At night there was mist on the hills.