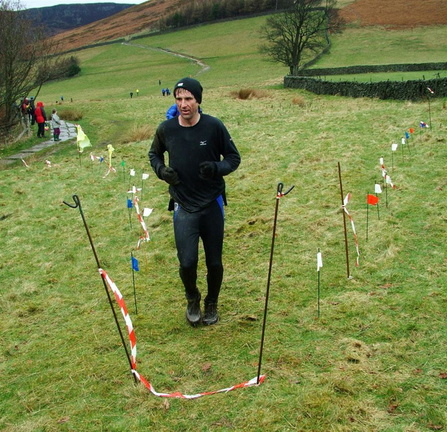 Starting at Askham the route visited the summits of Loadpot Hill and High Street before passing Angle Tarn on the way to Patterdale. Due to adverse conditions on Helvellyn the loop to Grisedale Tarn; the Wythburn Church car park; Helvellyn; Whiteside; Glenridding and back past Patterdale was omitted this year. That just left Place Fell to be conquered in a white-out blizzard trying to pick out a route across the snow covered ground before racing back via Martindale Church for an early finish with soup and other refreshments.

The weather had been fairly cold; with initially reasonable visibility before a white-out blizzard later on; strong winds on the tops but overall the wintry conditions added to the experience. There were reports of ice and hard-packed snow on the Helvellyn summit and a forecast for fresh snow on top which inspired the organiser to omit the Helvellyn loop on safety grounds. Originally the route would have been 42 miles with a 6 am start which was put back to 8 am since the route had been scaled back.

On the Sunday I went to The Cheviots rather than rushing back home. The weather there was equally interesting with a white-out blizzard and knee deep snow approaching Windy Gyle. This more than made up for the deficit in the shortened run the day before and brought the mileage for the weekend back to a more respectable level.