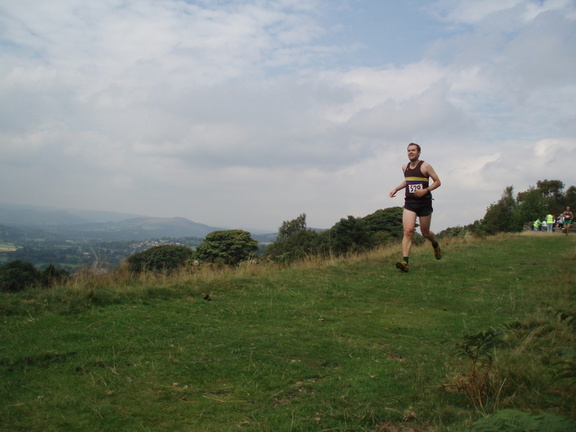 There were also walkers on the long course and a shorter course of 22 miles for both runners and walkers. The walkers started earlier giving them a head start. 32 walkers started the long course and 7 of them DNF'd leaving 25 finishers. All of the starters on the short course finished (40 runners and 52 walkers). Overall for all variants there were 175 starters; 13 DNF'd and 162 finishers.

The weather was warm and dry but soggy underfoot in places. The unseasonably warm weather was energy sapping making it hard to maintain a decent pace.

It was the 40th anniversary of the event so a special route of 40 miles had been devised to commemorate the occasion with special medals for all finishers. Starting at Sowerby Saint Peter's Cricket Club the route descended to the Rochdale Canal leading to the Calder & Hebble Navigation; at this early stage of the race the flat paths invited fast running at a pace that was not sustainable. Various tracks, trails and roads wound through and past Greetland, Ripponden, Cragg Vale, Withens Clough Reservoir, Todmorden, Bride Stones Moor (where I was unable to resist the temptation to divert from the optimum route to touch the trig point), Great Rock, Hebden Bridge, Horse Bridge, Pecket Well, Crow Nook Hill, Luddenden and back to the finish at the cricket club.

I arrived at the start early but in a sleep-deprived state. The fast start combined with a warm day conspired to lead to me fading early on. Having recently acclimatised to running in blizzard conditions the heat of the early spring sun was challenging and as the day wore on sunburn added to the factors slowing me down.

Near Horse Bridge a small fly landed in my eye and in an attempt to remove the creature I managed to rub salty sweat into both eyes causing near blindness. Staggering around looking for the correct path I managed to miss the tucked away entrance to the trail and floundered around barely able to see where I was going let alone the map. Finally after a long tortuous tour of most of the paths and trails in the area (some more than once) I arrived at the Pecket Well checkpoint. A marshal was able to kindly remove the troublesome insect and I was able to resume the run albeit now in last place and in danger of missing the cut-off points. In an effort to go faster I ran along without navigating as carefully as I should have done and missed some paths and turnings and had to battle across heather to regain the route at various points. After crossing the River Calder the finish was reached after one last climb.