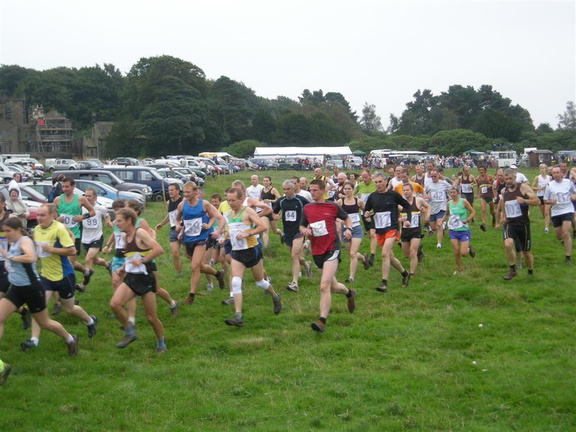 Weather: Very hot in the day and sunny but cold at night.

The Pembrokeshire Coastal 100 follows the stunning Pembrokeshire Coastal Path from Dale to St Dogmaels, Cardigan. The picturesque route follows rugged cliff tops and sheltered coves; shingle beaches; winding estuaries and passes some small villages. The exposed coast gave no shelter from the blazing sun and at night the sea breeze and clear skies led to a very cold night.

Pembrokeshire's coast displays a great variety of rocks and scenery. Nearly all of the rocks formed before the end of the Carboniferous Period some 290 million years ago. The oldest date back 600 million years and were observed running around the Treginnis Peninsula. Rocks younger than 290 million years old have been lost due to weathering and marine erosion. An observant runner might have noticed some igneous rocks at St Bride's Bay among the majority of sedimentary rocks such as Old Red Sandstone and Carboniferous Limestone formations. As the race progressed and moving north the underlying geology consisted mainly of sedimentary rocks laid down before the Caledonian mountain building period which ended about 400 million years ago. The folds and faults at Ceibwr Bay were created by this event. Indeed, they were so spectacular that they fully distracted me from the slog up the steep slopes. The last few miles lacked the magnificent scenery of earlier and the prospect of running along a tarmac road in the heat of the blazing sun was not welcome. So a leisurely walk to the finish avoided further over-heating.