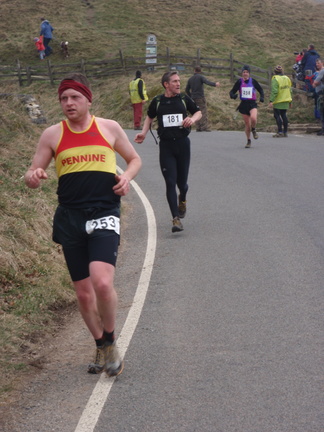 posted by StevenJones on 1st Jul 2018

The event took place on the hottest weekend of the year so far making the running hard work and sapping energy. South Wales is nearer to the equator than the Peak District and this seemed to intensify the debilitating effects of the savage sun and the searing heat. Indeed, it had not rained for some time giving rise to a route over parched and arid earth lacking in the marshy ground, mud and puddles normally associated with Wales.

The race started at 7 pm on Friday 22 June 2018 from the outskirts of Cardiff heading north and past the neo-Gothic Castell Coch before turning west along trails. It was already dark upon reaching the trig point at Mynydd y Gaer and thereafter heading north. Various hills, forests and open moorland were passed as well as going through the old mining towns of Treorchy and Hirwaun.

The night soon gave way to the dawn and the daylight enabled the enchanting Sgwd yr Eira waterfall to be fully appreciated as the path went behind the waterfall itself which was one of the highlights of the route. The exposed summits of Fan Llia and Fan Fryncyh offered no shelter from the blazing sun before dropping down to a lay-by on the A470 where a welcome checkpoint offered refreshments. Stockpiling as much water as could be carried it was off again and down to the Taff Trail before a steady albeit slow ascent of Corn Du and the rollercoaster ups and downs along the ridge to the summits of Pen y Fan, Cribyn and Fan y Big. Further along the ridge there used to be an area to test runners' navigational skills in a boggy area with peat hags but a new gravel path has spoilt this opportunity almost as far as Carn Pica. The long descent to the Talybont Reservoir was remarkably dry and lacked the usual soggy conditions which helped speed runners along. The next hill (Tor y Foel) made up for a lack of altitude with steep slopes which seemed all the steeper with weary legs after having just done the Brecon Beacons and the unrelenting heat of the day. Rolling hills followed and on the summit of Mynydd Bedwellte dusk was descending for a second night. Pausing to take in the views I was rewarded by a superb sunset with mostly orange skies behind the silhouetted shapes of Corn Du and Pen y Fan in the distance where I had been running (and walking somewhat slowly!) many hours and miles ago.

The Welsh Valleys followed with a typical steep descent followed by a steep ascent coupled with battling through shoulder height bracken and low level brambles on seldom used trails on leaving New Tredegar in the Rhymney Valley. Taking advantage of the reduced temperatures of the night my pace increased and I was finally able to catch up with another competitor who barely paused at the Bargoed checkpoint. After a short rest I carried on in last place over rough stony trails and soon gained a place and pressed on hoping to overtake some others. However, it was impossible to know if the runners in front were close or many miles in front or, indeed, had already finished. There were elements of hope and desperation as I tried to force myself along faster than my body wanted. From time to time I found myself falling asleep walking and running and just had to push on as best as I could. The trail eventually gave way to tarmac although a nice grassy or muddy descent would have been ideal. Daylight was beginning to return as I passed Caerphilly Castle which was a welcome sight and distraction from the weariness trying to slow me down.

Just past the castle was the final checkpoint and I was informed that a group of runners had left about five minutes before my arrival. That was heartening news and a brief stop would surely enable me to overtake them. However, the friendly checkpoint staff were kindly offering hot drinks and food and extra rest would put more of a spring into my aching legs. I was on the verge of departing when I noticed some Bara Brith which caught my attention and this source of nourishment would perhaps rejuvenate me and propel me onwards. Another cup of coffee was necessary to wash it all down. Meanwhile, the checkpoint staff looking at the trackers were able to report on the progress of the group of runners in front of me. They too had been suitably refreshed and now had a nearly 5 km lead over me with only 15 km from the checkpoint to the finish.

I forced myself onwards through hilly forest trails and up to Caerphilly Common pausing to admire the view of Caerphilly Castle to the north and Cardiff and the sea to the south. Up and over Craig yr Allt but no sign of runners in front forcing myself to try and go faster. Then about 3 km from the finish I overtook another runner and from there it was flat trails to the end. Shortly after passing under the M4 there was not much more than 1 km to the finish and I resolved to run to the finish and was rewarded by being able to overtake a group of three runners reduced to walking the final part. Shortly before 7.30 am I crossed the finish line.

Although it was good to finish part of me had wanted it to continue and I had enjoyed the varied scenery. It would certainly be a good event to do again in the future.

There was also a 50 mile version starting from Brecon and then joining the route just before Corn Du and the Brecon Beacons.