Helen Elmore
@GalaRunner
Warning self indulgent tweet; This weekend I should be doing the English champs race and the @KONGMMMKONG w…
11h • 2/04/2020 • 20:09

Fell Junior
@FellJunior
In the meantime, we're keen to see our great Juniors keeping active within the limitations for all of our wellbeing…
4d • 29/03/2020 • 22:03

Dark Peak Fell Runners
@dpfellrunners
@lliongerallt Its Rob Davidson, member of our running club. Good work Twitter. Follow me and I can dm you and share details
4d • 29/03/2020 • 13:04 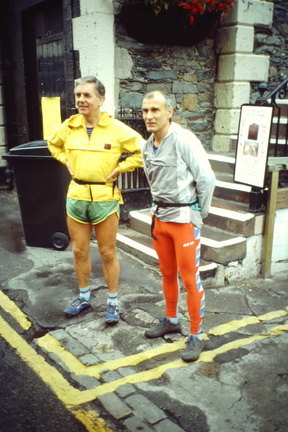 A stage race over a few hills in Wales. Parts of the route are over wild, trackless, remote and mountainous terrain. It is said to be the toughest 5 day mountain running race in the world.

Daily statistics are as follows:

Registration; kit check; pre-race briefings and buffet were all dealt with on the Sunday. A well co-ordinated team was on hand to deal with the various tasks to ensure that participants were registered and sorted out.

Everyone gathered in Conwy Castle with a pent up desire to get going. At 7 am the race started with the runners streaming along the castle walls and to the dibbing point to record a starting time. This ensured that those at the back were not disadvantaged. It took some time for the crowds to thin out and the early stiles presented bottlenecks giving those who had run up the first slope a chance to catch their breath. The day started out overcast with mist on the tops. The route gradually became rockier with each ascent and descent more demanding than the one before. The route visited most of the summits of the Welsh 3,000's. Firstly the magnificent Carneddau range was traversed which is a superb broad ridge for the connoisseur. As the day wore on the temperatures increased making the going tougher. Some restraint was required to avoid going too quickly to keep something in reserve for the rest of the day and, indeed, the rest of the week. Water and drop-bags were available at Llyn Ogwen prior to tackling Tryfan and the shattered summit of The Glyders (The Glyderau). By the time the Pen y Pass checkpoint was reached many runners were also feeling shattered. With a bit of spare time before the cut-off I made use of the cafe at the Youth Hostel to refresh myself. Getting up off the chair seemed to involve quite an effort before resuming the quest. The airy ridge scramble of Crib Goch was exhilarating as I ran along the rocky top causing some marshals to become anxious as they urged me to go a bit more cautiously. After Snowdon and Y Lliwedd it was practically all downhill to the finish for the day. However, from the top the outlying peak of Gallt y Wenallt seemed a long way off and after that it was still some way to go on weary legs. The campsite was at Hafod Y Llan at Nant Gwynant where runners shared pre-erected tents for 8 people. Drop-bags were available for overnight equipment and to re-supply for the next day. Food was provided in the evening and again in the morning. A group of Dark Peak Fell Runners had congregated and all had survived the first day.

For each of days 2 to 5 there was a rolling start. Slower competitors were advised to start early to give more time to beat the cut-offs. Faster runners had more time to rest and recuperate.

The route for day 2 tackled some rocky and rugged terrain in Southern Snowdonia on the way to Dolgellau including the Moelwynion and Rhinogydd (The Moelwyns and the Rhinogs). Near the summit of Cnicht Lisa Watson came sprinting past at a pace that seemed astonishing to me. It was hotter today than yesterday and the terrain more rugged with lots of pathless terrain slowing progress. Despite being in the mountains of Wales there was still no hint of rain. The day ended in the tents at a campsite near Dolgellau after a tough day.

I set off from the campsite at a run buoyed by optimism and exuberance. I managed to keep this up for just over a kilometre before subsiding into a walk. The two previous days seemed to have sapped some of my strength and energy but at least I was still moving. A long slog lead to the magnificent Cadair Idris with superb examples of glacial features although swirling mist obscured some of the view. After this there were quite a few more hills which seemed unrelenting. On the descent of Tarren y Gesail and looking south Machynlleth seemed a long way off. It dawned on me that I was going to be timed-out unless I ran the rest of the way. Fortunately it was mostly downhill but involved more effort than was comfortable. All morning I had been fantasising about getting to Machynlleth well ahead of the cut-off and pausing for a hearty meal and refreshing milkshakes; coffee and cake; ice creams and so on.

On the outskirts of the town it was apparent that I would have to run all the way to the checkpoint without pausing and certainly no chance of visiting a cafe. As I passed a shop at a garage some gravitational forces caught hold of me bringing me back into the orbit of the shop and propelled me through the door. To escape the pull of forces within the shop I was compelled to purchase a few pies and a couple of bottles of pop. Having lost a few precious minutes there was now an increased desperation and urgency to run on to the checkpoint. The goodies were consumed along the way and I arrived at the checkpoint with less than three minutes to spare. I ran through without pausing for my drop-bag and continued on the route. There were still many miles to go and plenty of hills and rough terrain to cross. After the summit of Pen Plumlumon Fawr it was downhill to the campsite. On the last steep hill I ran flat out enjoying the steep descent and trying to get to the finish before dark. Resting at the campsite later my legs stiffened up complaining about the last descent which I should have perhaps done more slowly to preserve my legs for the last two days. It was good to rest and chat with Mike Robinson who had been doing well.

The hills were now smaller and there were some road sections for those who like running on the flat. The grass tussocks of the Elan Valley provided welcome respite from the roads. The Elan Valley Hotel provided a very welcome chance to rest, refill water bottles, apply liberal amounts of suncream, eat and drink (two pints of milk shake, a pint of diet coke and a pint of orange juice all went down quickly) before continuing to the checkpoint about a kilometre down the road. The checkpoint staff seemed a little surprised that I didn't want access to my drop-bag or to top up my water bottles. I pressed on admiring the views of the Cabban-coch Reservoir along the way. The moorland plateau of the Cambrian Mountains featured Drygarn Fawr before a descent through bluebell woods. There followed a hideous road section in the heat. Walking along the valley along the road I was admiring the hills to the side and wishing that the route went along the tops where I would be more inspired to run. Fortunately the route went back into hills with the bonus of marshy ground. More roads followed and eventually the campsite near to the Towy Bridge Inn at Rhandirmwyn.

The event continued along roads in rural South Wales before going back to paths and trails over a few small hills. More roads followed and some trails to the Usk Reservoir checkpoint. After this things became more interesting with an ascent of The Black Mountain and the summit trig of Fan Brycheiniog with the spectacular views which continued to the summit trig of Carreg Y Ogof. Before reaching this summit the sky had turned black and heavy rain was inevitable. I got my waterproofs on before the deluge started but it never materialised and the rain was fairly light and lasted for about half an hour. This was the first and only rain of the whole week! The route continued over some rough terrain and seemed to go on forever but I reached the final cut-off checkpoint of the day in good time. Just two more minor summits then a final descent before the route reverted to roads and following paths across rural land. It was hard to get motivated on the final road section so I just plodded along at a brisk walk. There was a buffet at the end and presentation of trophies to all finishers (all the Dark Peak Fell Runners finished successfully). After a final night of camping there was a coach service to take the runners back to Conwy where most had parked their cars.

The weather was warm and sunny throughout apart from a brief spell of rain on day 5.

Overall it was a superb event to take part in with some spectacular and glorious scenery. Despite being tough it was enjoyable from start to finish with a variety of terrain to run over and vistas to take in. I could probably have finished in a quicker time. But how? Maybe going a bit slower over the first two days and then picking up the pace on the flatter more runnable sections later on? Or maybe going faster earlier on to build up a bit of a lead? However, it is a five day race and some restraint is needed. As one competitor put it when they dropped out on day four "If you are blacking out, then that is the time to stop." Lisa Watson seemed to have got it right by gradually working her way into the lead on day four and then increasing her lead on the final day.