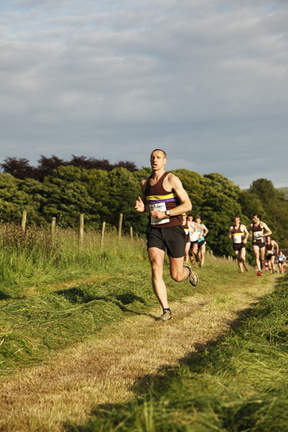 The event started at the Barn Elms Sports Centre in Barnes western London at 9 am on Saturday 6 July 2019. There was a strict 32 hour cut-off - with any finishers after that time being counted as a DNF.

The route went along the Thames Path along the River Thames following the curves of the river and crossing bridges occasionally including Westminster Bridge and through the City; past Canary Wharf to Checkpoint 1 near the Isle of Dogs. It was a hot day and it was tiring in the heat running along roads and pavements. Before I got to the first checkpoint my calves seemed to seize up and were painful so I was reduced to walking.

Crossing the River Thames using a tunnel the route passed the O2 arena and continued along the River Thames in the heat until the River Darent where the route turned south towards Checkpoint 2 in Dartford. The route went along the north bank of the River Cray and various runners were seen on the south bank suggesting that they could be caught. However, it was about 2 km before the river was crossed and the route then shadowed the earlier route but along the south bank of the River Cray. I missed Checkpoint 2 and found myself catching up with people that had overtaken me much earlier. Realising the error I doubled back which was a bit frustrating but necessary.

After that there was open country and into Rochester near the castle in the dark to Checkpoint 3. The route followed the River Medway before turning south to the North Downs Way. Although cooler in the night and better for running my legs were already trashed.

Checkpoint 4 south of Maidstone was reached in daylight. After pausing for a while sort out some troublesome chafing I resumed. Other runners had come in after me and had pressed on and got a head start on me. The day was cooler and rain threatened but did not materialise. There was lots of wet grass which soaked my feet leading to blisters starting to form.

At Checkpoint 5 at Sissinghurst I was inclined to withdraw since it was obvious that I was not going to beat the cut-off but the staff there urged me on. The route had various navigational traps with a choice of paths available leading to dead ends and some doubling back was needed.

Checkpoint 6 was at Sandhurst and after that the quantity of brambles on the overgrown paths increased. The route went past Bodiam Castle which was a magnificent sight. There were more dead ends and overgrown paths.

I had been trying to beat the 32 hour cut-off and increasing my pace after Checkpoint 4. However, with 6 miles to go it was apparent that finishing in 32 hours was not going to be possible (particularly with the paths being quite overgrown with some aggressive brambles) so I eased off to a walk to plod into the finish at Battle Abbey in Battle but with a final sprint to finish off. The refreshments at the finish had been cleared away and just the organisers and a few stragglers remained.

I finished in a time of 32 hours and 44 minutes. However, due to the strict cut-off I was not going to be recorded as a finisher and my name would not appear on the list of finishers. The next edition of the event will take place in 2021 (or possibly 2022) with a reduced distance of 100 miles to avoid some of the more overgrown paths and with a cut-off itself reduced to 30 hours.

Permalink | Closed to new comments | Last updated on Saturday 30th November 2019 at 9:50am