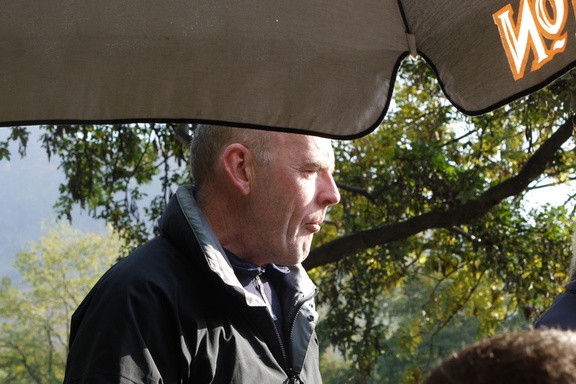 This magnificent cut glass bowl is the reincarnation of Eric's last bike. His family sold the bike and used the proceeds to buy the trophy. They have generously donated it to the club, to be awarded annually in Eric's memory to the club member who achieves the best overall performance in a club event. That's the best overall performance, which may not necessarily be the winning time - we've come up with a weighted formula that is designed to give an equal chance to both genders, and to all age categories, (in keeping with Eric's championing of advance age athleticism and of women runners). Eric grew up in sight of Kinder, and fought hard for our right to roam freely there and across all the Peak District moors. So in this first year, we thought it would be fitting to attach the trophy to a classic race that has a long pedigree of taking us to exotic nooks and crannies on Kinder that many of us didn't even know existed. The inaugural award of the trophy will go to the club runner who achieves the best overall performance in the two Crookstone Crashout races, i.e. the summer running this weekend, and the winter running just before Christmas.

Rather than have the trophy fester in its box for the next six months, we thought we would spice things up and make an interim "yellow jersey" award for the best performance this weekend. The person who takes it home will then be encouraged to bring it back in December and defend their lead, with the challenge of becoming the first proper winner of it. So, what's it going to take to win it?

We've tried to come up with a reasonably objective formula for quantifying who has achieved the best time, allowing for their age and gender. To do this, we took the six English Championship races for last year, (two short, two medium, two long), and assessed the winning time in each category as a proportion of the overall winning time. As an example, at Wasdale the V60 winner finished in 5hrs 17mins 27secs, which was 155% of the winning time of 3hrs 40mins 53secs. We have then averaged these proportions across all six races, to give the following formulas for each competing gender/age category:

We will now apply these calculations to the two crashouts, and the person who most exceeds their projected category winning time will take home Eric's trophy. N.B. this does NOT mean that the fastest runner has no chance of winning. If a whippet puts in a really strong time this will push up all the proportions and may mean that nobody exceeds their target. In this case, the winning time will be the best overall time, (this has happened in at least one club race this year). Let battle commence!

As a talking point, a cursory dry run of the formula on three recent club races has suggested that the strongest runner in the club at the moment may be somebody in the V70 age category. Eric would have been chuffed!