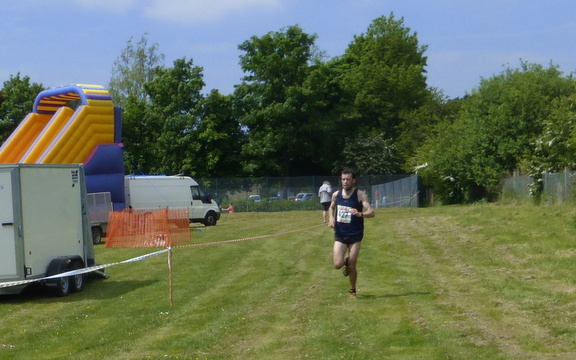 A Club Champs Report from Nicky

The Dark Peak Club Champs and dinner is the main event of the Dark Peak year and the race to win! On the day in 2019 I had a niggly hamstring and driving over in thick clag to Old Glossop, over Woodhead, I wasn't thinking I could have a good run. Warming up along the start track out of Old Glossop I also knew I'd be last of the fast runners as it was my worse sort of start; slightly uphill along a track for a mile. But after that Andy Harmer’s course looked great with lots of rough ground and three steep climbs. The worrying bit in the clag was a straight line across the moors for a mile or so but at least I thought I shouldn’t be able to miss the Pennine Way and so that would catch me!

We set off (about 35 in the fast group) and yes, I was last along the track along with Kirsty Bryan Jones. Everyone was heading directly up a hill which I had thought was the most obvious line, so I went that way. Kirsty carried on along the valley and I thought "Oh well, I’ve been Worsel'd by Kirsty already”! Once climbing I was catching and passing people and it did make getting the best line easier. I found some flatter ground at the top and tried hard to run into wind. I was catching Megan and Hattie, but I could hear them chatting! Jon Morgan came running towards us and said he'd lost a glove so was looking for it. I carried on to CP1. From there we dropped down into the valley and climbed up. There was an obvious line and with Megan and Hattie in front we all climbed together, but while I was out of breath they were still chatting! I passed them and hoped they didn't jog round behind me and then trot passed me at the Finish! Jon Morgan had caught us up and Pez had latched onto him out in front. This was CP2 Shelf Moor Stones. Now came the long cross moors section. Pez was helpfully wearing a very bright jacket and so with my compass bearing and Pez/Jon in front I was able to run quite well in the clag. It seemed to go on forever and we crossed one big path but not the PW. We were further right than I planned but all good. Hitting the PW Jon/Pez crossed it. I stopped and made myself check. Nope - this was the PW and we should now be heading left/downhill. I set off left and Jon/Pez soon joined me.

I now thought I was first Lady through CP3 but not knowing the handicaps given out for everybody you never really know where you are in the race. I headed off across the moor again towards Dog Rock and once on the edge didn't know whether to drop or follow the edge. Dropping looked rough so I followed the edge and soon saw the CP in the bottom. A horrid steep, rough descent to CP4, then a great steep climb back out again! I climbed hard knowing that there was a long flat and gentle descent to the finish, and I knew nearly everyone could run faster than me down there! I didn't lose too many places actually - but a few minutes to Jon/Pez. No ladies caught me, although Majka came in soon after me at the finish!

So, I had won the Ladies, being fastest lady and there was talk of me winning the handicap but that depended on other people and their handicap. We all went to the pub in Old Glossop and had beer and chip butties. This is the best feeling, sitting there having had an enjoyable race, while everybody chats about their race lines and future plans.

Later that evening was the Dark Peak dinner. Steve and I went along. The speeches from the Club Men's and Ladies Team Captains were excellent and then came the Handicap prizegiving. I was very surprised when they called me out, having won the Ladies, the Vets and the Overall Prize! However, Helen Elmore technically won the Ladies Vets prize so I passed the trophy onto her.

Thanks, Andy, for a great “Harmer” course. I will endeavour to follow in your footsteps where route planning is concerned!