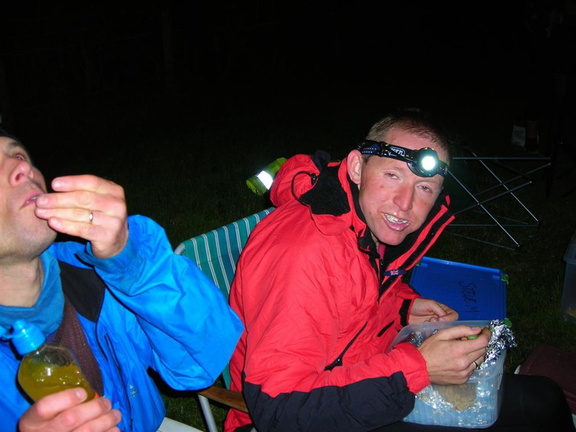 Eric Mitchell Trophy - the race is on! Again!

Our magnanimous club captain, Tom Saville, has decided not to accept the Eric Mitchell Trophy for his winning performance in the Three Tops race last Sunday, which he won by a clear 35 minutes in a rather small field. Instead, Tom has decided to re-nominate a race with a bigger field and stiffer competition. The trophy will now be awarded for the best performance in the winter Crookstone Crashout this Sunday.

Given that Tom will be away in the Lakes, the race is well and truly on and we are guaranteed a new winner of Eric's memorial trophy!

Tom's generous reasoning is he would have felt a bit guilty taking the trophy back home without more of a fight last Sunday.

A reminder of how this works: the trophy will be awarded each year to the runner who achieves the “best” performance in a nominated race, using a formula that weights performance by age and gender.

The winner of the trophy will be either the runner who achieves the fastest time or the runner who beats their weighted time by the biggest margin, (e.g. if the fastest time is one hour, a v70 runner will have a weighted time of around 90 mins, so if they come home in 85 mins they will win the trophy unless a runner in another age category finishes even further ahead of their target time).

Calculations will be done after the race on Sunday, and the trophy will be awarded in the Anglers Rest at Bamford afterwards.The winner will then have the honour of nominating a club race next year in which they choose to defend the trophy. Let battle commence! (again)

Below are the ratios that will be used to calculate the trophy winner after the race on Sunday. They're based on the winning times in each age and gender category in the six English Championship races across the 2018 season, aggregated and averaged to give a proportion of the winner's time. The outright winner of the Crashout will win the Eric Trophy unless the first person in another age/gender category exceeds their target time. in that case, the winner will be the person who finishes furthest ahead (in minutes and seconds) of their target time. Here are the target times: