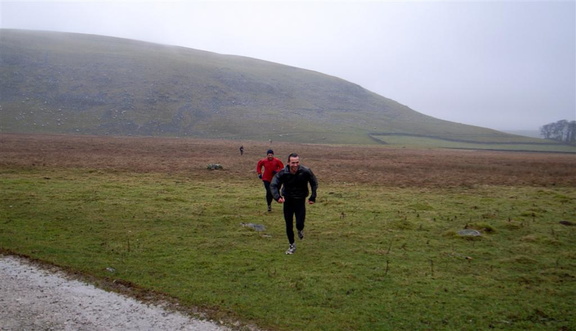 The second running of this event attracted a field of 20 eager biathletes. The 2 laps of the field allowed a group of four to break away and establish a bit of a lead. The rest chatted fairly amiably in the sunshine. The cycle ride up to Redmires stopped any conversation. Darrel, Andy and Simon were miles ahead. The rest were tussling in the ‘peleton\', having their own little battles. Colin Lago showed h.is biking pedigree with an impressive attack as we approached the top dam.

At the end of the road the chasers were glad to see Andy Bell taking time to change out of his biking shoes into trainers. He didn\'t change his shorts though. The run was well contested. Stanage Pole, Stanage trig and Burbage Bridge had to be visited before returning by any route to the bikes. Andy chose to retrace his steps round the edge. Everyone else went across the moors, by a variety of routes, some of which were deep in heather, bracken, tussocks, water. Simon and Darrel were still miles ahead, but on the moor crossing Simon got it right and Darrel didn\'t, and lost several minutes and two places.

Everyone eventually regained their bikes and enjoyed the blast back to the Sportsman. Jim Fulton, feeling that he had sufficient of a lead over John Myers chose to make the race a triathlon and enjoyed a dip in some Yorkshire water before remounting his bike. The final lap of the Sportsman field produced a couple of contests, but most people were thinking of the beer by then. The post race \'crack\' was the most enjoyable part of the morning\'s sport as it usually is with these kinds of event.

This route will probably be kept for next year\'s event, so people have time to recce the crossing. Thanks to Tom and Enid Foley for bike minding, Pete Dyke for traffic control and John Manthorpe for timekeeping.