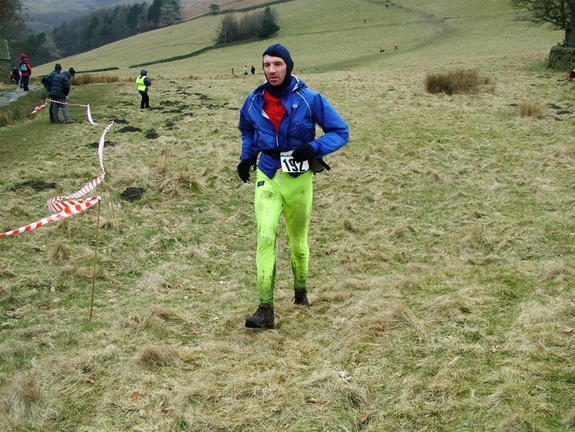 Burbage Skyline on Wednesday 15th May 1996

Yet another bitterly cold May evening for this race but at least this time it was bone dry underfoot. Same course as the last four (?) years with the ascent of Carl Wark before the run to Mother Cap although there was a minor change on the way to Mother cap with probably added 10 or 15 seconds although it avoided the queues of previous years up the rocks.

As always it proved popular with Dark Peakers. 63 feature in the results yet there were still some left over to support at various points on the course. Several new (or newish) members featured prominently, particularly in the women\'s competition where Charlotte (Charlie?) Dawson. Karen Dalton and Claire Varley claimed second third and fourth respectively.

In the men’s competition it was experience which told. Three of the top 4 were veterans and Dark Peak members with a combined club membership approaching 50 years, (Graham Berry, John Armistead and Alan Yates) carried off a clean sweep in the VSO category... with Billy Wilson 4th.