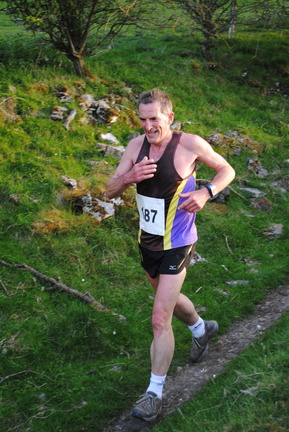 Those who missed this race may have missed their best chance for several years for a personal best or even a record. A Mark Hayman or a fit Tim Tett could have seriously threatened Malcolm\'s record. Conditions were almost bone dry in the peat bogs with a cool easterly breeze helping the gradual climb from the knoll to the trig. At least it gave Andy an excellent chance of what would have been a popular win over this classic course. And it looked on given Andy\'s reputation as a descender. Richard Baxter looked like he might mount a challenge before he almost ground to a halt in de middle of the race with a bad stitch. This left Andy in front but Roger out descended him to take a narrow victory.

A disappointing turnout for this anniversary running, possibly the smallest ever summer field. It can be attributed in part to the impending BG attempt at the weekend and to rival races at Tebay, Denby Dale and Oughtibridge. However, the number of spectators (at least half a dozen) suggests that the race\'s fearsome reputation may still have been a contributing factor. Then again, perhaps some members think the real challenge is to be found in the mid winter running when the course can become not just a classic but also an epic.