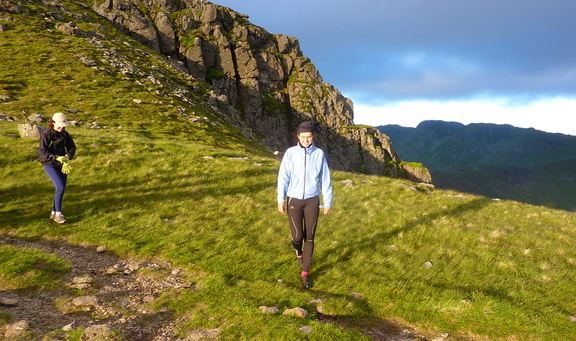 The umpteenth running of that great classic race, the Crookstone Crashout, and my nearly umpteenth participation therein. It\'s about 5 minutes after the start. 1 feel I am not going all that badly but the gap between me and everyone else is already significant and growing steadily. I begin to have dark thoughts about Dark Peak Fell Runners. There was a time when I could rely on some rubbish turning up that I could keep close to and overtake on the way back, but now there\'s no sense of social responsibility and no trace of youth policy which once briefly promised to fulfil the same role. These and similar churlish thoughts take me to the knoll where I see the familiar path is entirely free of human form. Secure in my private world I begin, cautiously, to experiment with running. Just a few paces at first and then, with the aid of a slight descent, a frenzied burst. Well, that\'s how I saw it.

After the first big rock I see, dimly through the mist, the next to last runner. Mist? Nobody said anything about mist. Press on. Now the leader, returning, comes flying towards me. Hi, Graham! Graham? When 1 had last looked up and seen the leaders disappearing over the knoll Andy had been well in front. Don\'t say Andy\'s got lost. Hilarious! He will be embarrassed. Up and down groughs, run a bit, walk a bit. Run damn you. Now 1 can see the trig and the second last person going round it. If I run well I\'ve a chance of catching him. Something to go for anyway.

Round the trig at last. I peer into the mist. There is nobody in sight. Well, no matter, it\'s back along there. Run damn you. That\'s funny, the path has gone; there are no footprints; try veering left a bit; still no path; further left. Stop. I should be running into the wind. Turn round, face into the wind. So, the edge path overlooking the Snake must be on my left. Face half left and run. 1 meet a nice path and turn right along it. Run damn you. I lose height and the mist clears enough for a brief glimpse of fields and the Snake road. Now the path rises and away on my right I see a familiar rock. Best to stay on the path. I turn right and struggle up through deep heather. This bit is heath, actually, Erica ciliaris, now it\'s heather again. All tiring and tiresome. Here\'s the rock. Oh, I don\'t recognise it after all. There\'s a path though, roughly the right direction, but no footprints. Run damn you, must come to something.

Nothing comes. Niggling doubts grow to the size of severe hallucinations. I am sure I did go round the trig. Now the ground drops away and I see below there are two people looking at a map. As I start to run towards them they put their map away and start running, away from me. Run damn you. At last I get close to the nearest one. \"Excuse me. Do you know where you are?\" Well what would you say? \"We think so but we are not sure\". Typical! 1 run myself silly to catch them and they are lost as well. My dark thoughts about Dark Peak Fell Runners now expand to take in humanity at large. They get their map out for me to look at. Fools! As if I could read it without my glasses and my eyes watering like this. They have come from Win Hill. I look at where they are pointing. A path leads down to pleasant, mist free fields, the path from Jagger\'s Clough towards Win Hill.

So Crookstone Knoll is... an arm raised upwards; and the Snake road... We all raise an arm. Between us we define an inviting 45 degree segment. I thank them. 1 wish them an enjoyable run. I do not mention a race I was once taking part in. I aim at the centre of the segment, level tussocks contouring round to my left. Run damn you. After a while, a fence or two, I see Crookstone Knoll above me on my left and down to the right some cars and some runners still waiting. “Where have you been?\", someone asks. If I knew that 1 would not have gone there.


Front Runners in the Mist

Stuart Oglethorpe led well to Crookstone Knoll before allowing himself to be caught in thick mist. At the trig Jon, Alan and myself sped off at a slightly new angle towards Coffin Rock. Whilst worth exploring it needs greater precision and has no paths! It let in the old stayer Graham Berry who narrowly lost out to youngster Andy Jenkins, winner of the Cakes of Bread.

Nothing can ever be taken for granted in this classic.
Andy Harmer

Will these be threatened in the 25th running of the Crashout this mid summer?