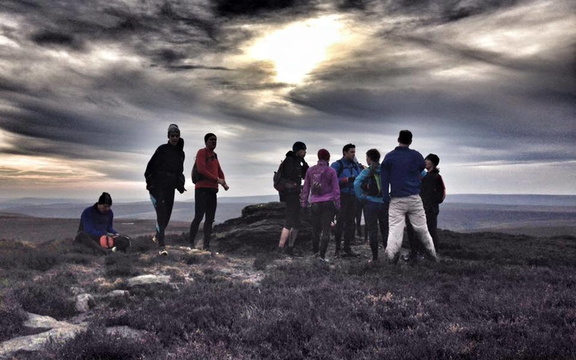 Since the race began in 1985 snow has forced cancellation on 2 occasions. Once in 1985 when a brave few faced arctic conditions only to be driven back before Lost Lad; and again in 1991 when four intrepid souls managed a version of the Rivelin Skyline from the Post Office. This year the snow had fallen a good week before and, whilst conditions were exceptionally difficult going up Lost Lad and over Wetstones, they were reasonable, if slower than even last year\'s slow times. Mist on Margery Hill led to some walkabouts but not in the usual vein as many runners followed footprints in the snow. Young Eric lost them and overshot the Cut Gate path ending up well up the valley resulting in him missing Alport.

A good turnout of 9 o\'clock starters swelled the field but many expected chasers were absent and only 3 set off last. However, the staggered start continued to work well with Gavin Clegg (9:15) and Dave Lockwood (09:00) first back. It is now 4 years since conditions were favourable. On that day in 1992 13 runners broke 2 hours and virtually the whole field of 40 were home in 2h25m.

Alan Sealy was fastest home, always looking a likely winner if he managed to get off Margery Hill OK. Quite a few runners have yet to develop the stream descent as a finish; this cost places and 1 or 2 minutes. There are fallen trees to negotiate and collision with them is not recommended as I can painfully bear witness.

Dick ran well as did Jan maintaining the women\'s presence. It\'s always a pleasure to see many of the stalwarts complete the tour. 1 had originally thought of changing the route e.g. Pike Low to Pike Low via Margery and Broomhead cabins but a time of 3 hours on Christmas Eve put me straight on that.