James Pierce
@InvisibleJim1
Five years ago incredible scenes as we supported @NickySpinks on her #bobgraham round record attempt. This pic does…
19h • 5/04/2020 • 9:57

Dark Peak Fell Runners
@dpfellrunners
RT @peteblandsports: As we begin another month, our shop remains closed and the vans remain off the road. So online it is and another disco…
1d • 4/04/2020 • 8:47

Dark Peak Fell Runners
@dpfellrunners
@lliongerallt Its Rob Davidson, member of our running club. Good work Twitter. Follow me and I can dm you and share details
7d • 29/03/2020 • 13:04 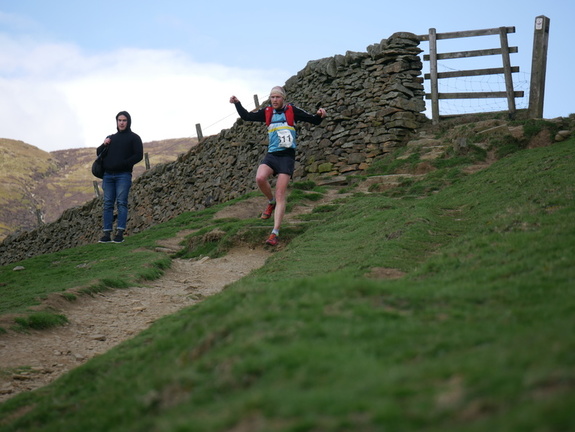 My excuse for not visiting my parents, my brother and his various sprogs for Christmas was a Boxing Day Fell race on the mountains of Mourne in Northern Ireland. I took the opportunity of Christmas Eve and Christmas Day to practise my pronunciation of \"Power Bar* and other important running vocabulary and warmed up with a Chrismas morning jaunt up Slieve Donard where we me met another group of fell runners (keen these Irish).


Relieved that I wouldn\'t have to refuse another of Ron\'s mum\'s mince pies until at least 5pm, we set off for the race. The Moumes were covered in snow and the weather sunny and clear (a rare event). A field of almost 40 lined up at the sun which led onto a track resembling an ice rink. Having been assured I was in with a good chance of winning (as probably the only woman there!), I was disappointed to see there were five other women there, all wearing tee shirts from other impressive running events.

We skated the first few hundred metres then up a snow covered track followed by heather and later, at the col, knee deep snow. I was in about 19th at the time, so there were plenty of footprints to follow (thanks Ron!). The view from the col at 520m was stunning and as usual I forgot I was supposed to be racing until someone took my photo and shouted, \"You\'re first woman\".

The descent was superb. The deep snow meant that even I got up some speed as all the ankle twisting rocks and slippery grass was under soft snow. My nearest competitor in the \'ladies\' class told me she walked all the way down!

It was a great event which despite being short had a real mountain feel about it, added to by the weather and a big turnout of spectators, all walking part of the route to burn off some Xmas pud and ensure everyone got back safely.

Prizes and refreshments followed with more sandwiches and (you\'ve guessed it) mince pies than we could eat. I made the most of my 5 minutes of fame and they were so short of sports news that the results were even in the local paper.