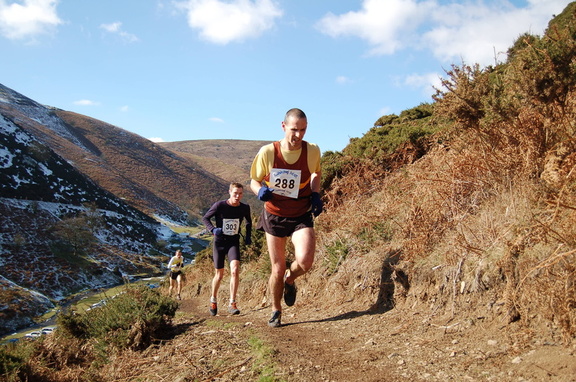 Originally intended as a once only 20th wedding anniversary celebration, this little race attracted enough masochistic appreciation to justify being run again. The original September date was marred by midgies, bad for the competitors and even worse for the time keepers. Subsequent races were switched to the spring. For a while invitations were dished out to Penistone and a number of non-Dark Peakers have competed. Winners have included Tim Tett (several times), Micah Wilson (twice) and Mike Jubb (course record holder) as well as Rob Pearson, Andy Moffat and Mark Harvey. The ladies record is held by Carol Greenwood and the fastest veteran is Mike Greaves.

Over the years most Dark Peakers realised what a vicious little race it is and support has waned. Last year we decided to alter the course but as 1994 was to be our last year in Sheffield we decided to maintain the format once more to allow a new organiser (Howard Swindells) a free hand to design \"Back Tor and Beyond and Back\" to his own liking. Fortunately the trophy awarded by Ken Slack (one time landlord of \"The Strines\") is inscribed \"Strines Fell Race\" so that leaves Howard choice of route and name.

All of this, together with a cold wet evening reduced the starting field to only sixteen and with two of them \"did not finished\" (something never previously recorded). This did not prevent a keenly fought race with only 75 seconds separating the first six. Victory went to John Cant by just 4 seconds from Phil Smith. Alan Yates claimed the veterans prize and Jenny James (who had been ahead of Alan at the trig) came in first lady.

Thanks to everyone who has supported the race over the years and good luck to Howard with the new format.