DPFR Juniors
@DpfrJ
A favourite destination of many a Dark Peaker and the junior races through the village have been the scenes of nume…
1d • 21/10/2020 • 9:13

Dark Peak Fell Runners
@dpfellrunners
RT @cbdgb1: A wee wander up Scafell Pike today with a spade and brush for @fixthefells and @NTScafellpike wondering why no litter. Bumped i…
3d • 18/10/2020 • 19:20

Dark Peak Fell Runners
@dpfellrunners
RT @TimBirchWild: Vigo our incredible #BeardedVulture has finally left our shores. The French Alps where she was born is calling her home.…
5d • 16/10/2020 • 13:57 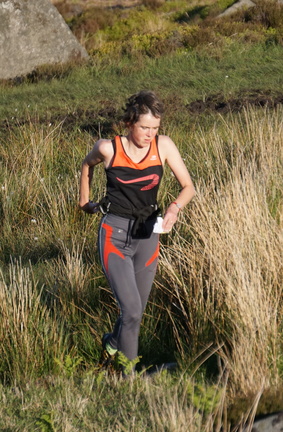 The previous time I did the Glossop race I think I was very close to last (if not last ). I remember staggering into Glossop park after about four and a half hours, having crawled over from Torside; and lying on the ground for a while as my then small children leaped on me demanding to be \'played with\'.

I had thereupon resolved not to do this race again; but a couple of years after my participation it died anyway and so the temptation was removed. It was revived this year as the \'New\' Glossop race . It fell conveniently as a good mileage event 2 weeks prior to the Karrimor. Pete Griffiths was encouraging Dark Peakers to support the race, and as it was a lovely day I decided to have a run out. I went across the Snake with Hugh Mathieson and the bills looked grand. There was a nice size field of about 70 runners with a reasonable Dark Peak contingent.

The race began quite steadily and I chatted to Graham Berry as we ran along the start of the Doctor\'s Gate track. Graham stopped, ostensibly for a pee, and like a fool I raced on after the leaders, not recognizing a classic worsell. Graham apparently turned off the track immediately after his \'pause\' and took a quicker line to the Shelf Stones. I followed the leaders up the steep, trackless ascent which proved to be a couple of minutes slower. As I came over the brow of the hill runners were streaming along the track ahead of me .

It was a delightful run along the path down Hern Clough and then above the Alport valley en route to Alport Trig. My favourite sort of running on a slightly downhill track, skipping over dips and stones dodging past the odd person, chatting to anyone around you- just wonderful! I caught Jim Lawrenson near the trig and stayed with him down to Alport Castles.

And then we overtook Andy Harmer (now that\'s not something I do every day). Andy was suffering with an achilles tendon injury, but like the courageous soul ( or silly bugger ) that he is, had decided to complete the race. Down we went to the Alport valley , down the track, up the road and all the way up Blackden Brook. lt was warm and sunny. Blackden Brook tasted good. The control was right at the top of the brook. We made our way round the edge to Fairbrook Naze and plummeted to the Snake river.

The next control was almost at the top of the Ashop Clough track, from where we were flagged up to the start of the Pennine Way flagstones. Then began a long grind to the finish in Glossop. The first couple of miles along the slabs was O.K. for me although many people complained about it. I fell to pieces on the descent of Doctor\'s Gate. I had been dicing with Jim most of the way down and generally gaining on descents. I had been confident therefore of \'doing\' him on the Doctor\'s Gate. Alas it was not to be.

By the time that we got to the valley I was gone and the last couple of miles was as painful as any I can remember. You know the sort of thing:- when you can only keep going by ticking off features alongside the path at 50 metre intervals and concentrating on just running that far. Anyway Manor park was a long time coming and the ensuing cramps were a long time going. I was only cheered by stories of Dr. Yates experiencing even greater discomfort culminating in his telling Roger Baumeister to\' f--- off and let me die in peace.\' Anyway he finished too and a good time was had by all.