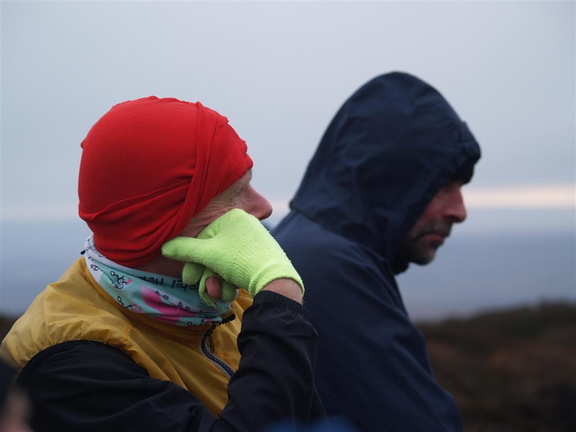 Friday night saw us in Threshfield meeting the Rotherham lads, Harney, Jepson, Taylor et al fir the usual pre-Fellsman quota of Tim Taylors. All apart from Roger Baumeister that is. He was having a wild night out in Scunthorpe followed by two hours sleep and a brisk drive to the Dales.
With 61 miles and 11,000\' ahead we cast notions of a healthy diet to the wind and consumed the full heart attack breakfast on Saturday morning. Talking of wind, little did we know as we set off up Ingleborough that it was to be one of those trying days when, whichever way you turn, there\'s a fierce headwind to contend with.
Tim Mackey and I set out to run together and made steady time to Dent. For Tim it was a brave decision even to start as he was just on the way back after prolonged trouble with sciatica. As Jeff Harrison says, when you get to Dent it\'s like having done the Three Peaks and with the Watershed still to do. The weather, confounding the forecast, stayed dry and we trundled on.
40 miles gone and Tim was feeling the effect of a lack of recent long days out. Locked into my own battle against the wind,
I only realised that things were getting serious when, faced with a six foot dry stone wall, Tim fixed the problem with a glazed and generally vacant expression and stood swaying slightly but apparently bolted to the ground.
Sensibly at Fleet Moss, after 10 hours out, Tim called it a day. At Cray I found myself grouped with Peter Barker, a dark Peak member of long standing whose aquaintance I had only made the night before over the Tim Taylors. Peter must have had his brain out long ago as this was his twentith Fellsman.
Our group lost time with some random navigation in hill fog on Great Whernside. The wind was still howling into our faces and by now it was bloody cold. Like all good things, this splendid run out had to end and did so with us pounding down the two mile road finish in Yarnbury in full waterproofs. Steam was generated. The hot shower and the kip were splendid and on Sunday morning, with the 61 miles now behind us we cast all notions of a healthy diet to the wind and consumed another full heart attack breakfast.
Kev Borman
Both the route and the start have changed in recent years. Traditionally it started at midday but now it starts at pam and the challenge is to finish in the light and avoid getting grouped up into fours at dusk.
There were a fine mixture of people in the startfield from the fit and famous to quiet couples in big boots and woolly socks. The event is still firmly entrenched in its walking traditions but Walshes are still acceptable footwear.
Off Ingleborough you retrace the Three Peaks route to Whernside. The early adrenalin had been burnt off but tiredness had not set in so the mood was relaxed and people chatted on their way to the summit. I passed Jeff on the way up and met Roger on his way backdown from the summit, seemingly ignoring his own advice of starting steadily.
Gragareth is the third big climb, a hill I\'d not been on and here was Roger having an early lunch. I carried on over Great Coum and past the pubs in the valley (an awful temptation). Dent is a major landmark and I celebrated with a sit down and a rest.
Great Knoutberry is a fine big hill and ushers in a great long stretch of wild rough moorland. This is the crux of the route and can drain the last ounces of energy leaving nothing for the last 15 miles. The field had spread out, I was running alone and was heartily thankful to find a little enclave of humanity at the checkpoint above Buckden.
I reached the final road crossing with two others at 8:00pm. We were all ready to go but the checker insisted that we waited for a fourth. A group of five arrived who had been together all day and insisted that they were not going to be split up. A group of nine was ridiculous and everyone was getting cold and argumentative. The organisation is not noted for its flexibility.
Finally one of the new arrivals agreed to go ewith us and proved to be worth waiting for as he led us unerringly off Great Whernside. The end was in sight and we raced across grasslands to the final roadhead. Five minutes longer and I would have had to get my headtorch out.

Ed. A rare case of two reports for one race. Don\'t let that put you off! Rick\'s article was the second to arrive so received some severe editting but offers quite a different perspective and, I hope you\'ll agree, well worth including.