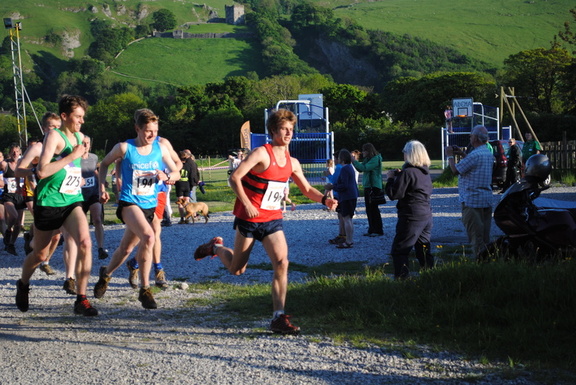 A good turnout as befits this pre-season effort. The conditions were very reasonable if not warm in places. A good clag ensured that the pertex was well bid for; some alleged fell runners, even stalwarts of Pym\'s Chair were rumoured not to have visited Lost Lad top, as opposed to its End. Other alleged fell runners were seen walking up Lost Lad and even the first steep field but as they won the race they have clearly been schooled by Andy Styan rather than Andy Harmer.

The race was shared between a trio of runners with Phil Crowson acknowledged as the sprightly one of the bunch. This recent leaning towards runners coming in together will be deeply frowned upon by some in the far reaches of the DPFR Empire (eg. Cornwall). Tony and I had many a battle with not an inch given.
The records were well safe this year with times 5 to 10 minutes down on last year. The soft going plus the odd excursion clearly added time. pawl Sanderson, Mike Browell and Neil Goldsmith all ran quicker than last year but another, who is more at home on Shirecliffe Hill was over 40 minutes down. As he refuses to say where he went and appeared from the wrong direction at the finish we only have his word that he reached Margery Trig and Alport Castles. mind you, the trig was a chaotic place with runners approaching from all angles.
An interesting point, it seems that a large chunk of time is pulled back between the start and High Stones; probably due to the two climbs and some rough going. After the trig the gap doesn\'t stretch on the road and descents.

Graham Bell and John Myers also started but had not arrived after 3hl5m when the organiser went home for his porridge. Rumour has it that they finished.
Records: Overall
Tim Tett 1:36:37
Veteran Andy Harmer 1:40:49
Super vet Tony Trowbridge 2:03:00
Woman Claire Crofts 1:58:10