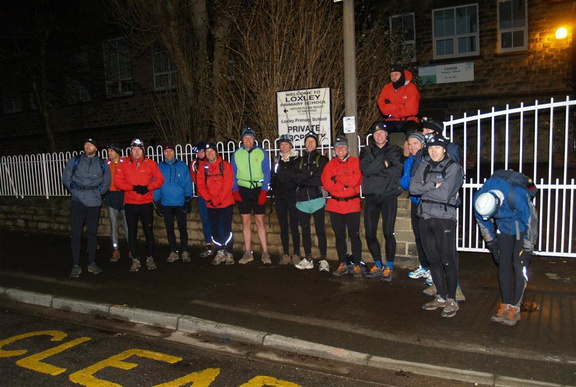 \"Warts Revenge Revenged\"
By comparison to last year, conditions were good but in fact
the water-logged ground and mist still made for slow times. On a
clear fast night there could be well over five minutes to come off
Dave Holmes\' new record. A record turnout of 22 reflected the
resurgence in popularity of night running this year.
Andy Harmer took the lead from the start making a bid for the
Warts Double. His main challengers from last year\'s November
classic, Dave Holmes and myself, were close pursuit. However, the
charge along the rocks of Stanage Edge saw Andy\'s challenge fade
to be replaced by that of Mark Harvey and, night orienteering
expert, Peter Gorvett. The four remained in close contact past
Stanage Trig and Higger Tor until the climb back up from Burbage
Brook to Burbage Bridge. Here Dave chose (?) the higher path to
come out above the bridge leaving Pete with a slight lead going
onto the final moorland crossing.
This year the return via Stanage Edge was declared out of
bounds leaving everyone to pit their wits against the featureless
and boggy moor. This is a race that requires navigation, night
ability, local knowledge and strength. Surprisingly it was the
navigation that let Pete down. Mistaking one stream junction for
another he appeared to head off across the moor on what appeared
to be about 30 degrees East of the correct (roughly due North)
bearing. His 30 second lead became a 4 minute deficit by the
finish as he eventually found that the exceptionally wet piece of
ground he was trying to negotiate was in fact Redmires Upper
Reservoir.
I now had perhaps 30 seconds on Dave who was taking a similar
but slightly more Westerly bearing across the moor. I had the
navigation and local knowledge but so did Dave and his
strength turned the gap to a 20 metre lead in his favour as we
converged near the source of the stream down to Redmires. It was a
repeat of the battle for second in the Warts Revenge only then I
had had the few metres lead. Once again we proved to be evenly
matched for speed and Dave recorded a well deserved victory. Mark
had opted for the faster running of Friars Ridge but had
difficulty locating the path and finished fourth.
Post race controversy erupted when the co-organiser and
winner found that, despite his insistence that everyone register
(and carry safety equipment), there was an inconsistency in the
numbers of starters and finishers. Close scrutiny revealed the
offender to be one D.Holmes who had forgotton to register with
himself before starting. In the absence of any officially
registered complaint from fellow competitors the result stands!