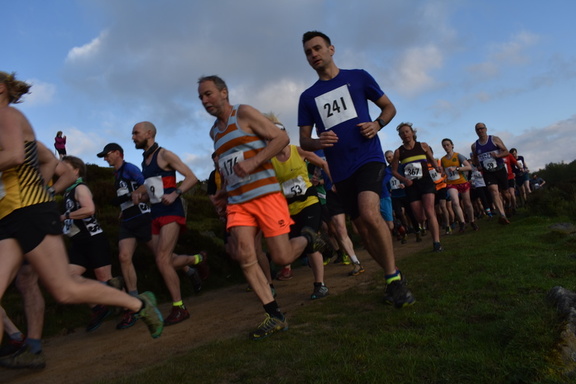 This race was organised by me to celebrate my 55th birthday
and the 25th anniversary of my introduction to orienteering in
Wyming Brook.
Course: Start and finish at Sportsman Club Hut. Visit these
checkpoints in any order. Enter and leave Lodge Moor
Hospital via the gates, not over the fence, otherwise
any route may be taken.
Lodge Moor Clock Tower (T)
Rivelin Needle (N)
Wyming Brook Knoll (K)
The Headstone (S)
The Conduit Pillar (P)
I thought that four of these points were well known and easy
to find. The fifth, Wyming Brook Knoll, is surrounded by marshes
and rock-fields and was included to give me a chance of winning my
own race (enhanced by a thick fog). To my surprise many had not
heard of Rivelin Needle and had trouble getting to and from it.
Twenty Four punters left the Sportsman Hut. Twenty Three
turned right for Lodge Moor Clock Tower. The deviant (John Ed.)
turned left for the pillar thus staking an immediate claim for the
major prize (for originality) which he secured by completing the
course in the reverse direction to everyone else. At the Clock
Tower most people did a U-turn back past the Sportsman and Three
Merry Lads,heading for the Knoll but Howard Swindells took a
courageous decision by slanting down to Rivelin Dam from Allen
Syke. He lost a little time in locating the Needle but when he
reached the Knoll, he was surprised to find almost all the other
runners still milling about trying to find it (except me, Mike
Hayes, who had sneaked off and built up a big lead). Howard then
set about hauling me in and overtook me just 200 metres from the
finish to win the \"Revenge is Sweet\" prize... a distinctive
carving set with fur handles donated by Hannibal Lechter. Andy
Harmer won a stuffed duck with a wonky neck because in getting
lost he managed to decoy all the other star runners to the wrong
place too. As the most promising newcomer to night fell running,
Chas Hird was awarded a stuffed fledgeling swallow.
There happen to be many different ways in which you can visit
all the checkpoints and return to base in a reasonable time. In
fact if you want to join the elite Rivelin Champions Club there
are 10 different ways of doing so. Of course it is easier to do a
fast time in daylight; currently Alan Yates holds the record in 58
minutes. It is a pity that Alan couldn\'t run the night race. If he
had I\'m sure he would have recalled the personal humiliations that
he suffered when he organised his Great Urban Fell Race, bringing
to my attention that...
\"It\'s a poor man who can\'t win his own race.\"