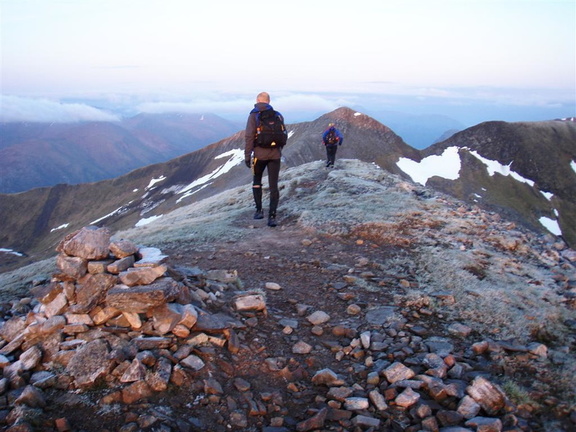 The bank holiday and the clash with the Brecon Beacons race
prevented it from being a record turn out this year. Dave
Cartwright, who has run in most Dungworths, was a worthy and
popular winner. Mrs Harper was in attendance to present him with
the Granville Harper Memorial Shield on which his name becomes the
first non-Dark Peak one after eight years. Hiro\'s fan (for the
most inspired walkabout) looked to be a certainty for John Myers\'
trim last minute swerve from the pub car park on the Edwards\'
alternative finish. The trophy, however, was snatched from his
grasp by the dramatic emergence of Dick Pasley, hotly pursued by
John McCall, from the depths of Pudding Poke. The committee
eventually decided that the trophy should be held by these two
jointly; it being impossible to discriminate between the audacious
originality of Dick\'s exorbitation and the sublime mindlessness of
John\'s slip-streaming.
Everybody seemed to enjoy themselves: smooth organisation,
clement weather, impeccable course conditions and afternoon bar
extension at the Royal (possibly the last major gathering before
closure and demolition?) all contributed to a memorable sporting
occasion. Thanks from all the runners go to Tracy (who maintained
the family tradition at Sandersons Bottom), to last year\'s
champion Graham Berry (unable to compete through injury) for
sterling work at Jones\' Corner and for getting most of the flags
back; and, of course, to the ever faithful band of course-
clearers, marshals and time keepers.