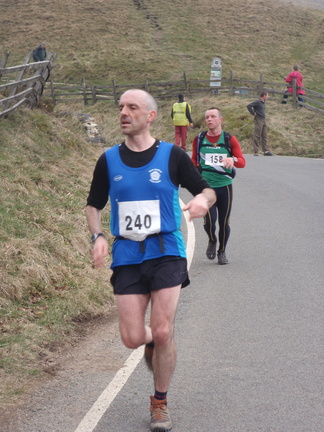 The above placings are accurate, but the times are a bit approximate. This is because a series of calamities afflicted start/finish arrangements. It began with a scandalous false-start, caused by herd instinct after one or two tensed-up competitors had failed to differentiate between the words \'Good!\' and \'Go!\'. Then the time-keeper\'s stop watch stopped just after the runners had left the field, which compounded the usual pandemonium of the Dungworth finish. Phil Wheatcroft and Tracey Sanderson, ably assisted by Marilyn Small, coped admirably with the adversities and are to be congratulated and thanked for their sterling work in putting order into chaos. Thanks also to Dick Pasley and Helen for manning Jones\'s Corner, as well as to the enthusiastic spectators (Fi Berry and Wendy Trowbridge) who lined the course.
Nearly everybody turned up on a bicycle and all but about 6 of the runners were V40+, which speaks for itself. It was a memorably beautiful day and the atmosphere was as competitive as it convivial. The top-class tussle between Neil and Alan at the front was replicated by private battles and some impressive individual performances (Richard Hakes\'s and Mick Cochrane\'s being particularly noteworthy) all the way through the satisfyingly big field. Plans had already been laid to ensure that Andy Howie went away again with Hiro\'s Fan, so that next year it can become his in perpetuity. In fact, the scheming was unnecessary because Andy obliged by taking himself and another runner off towards Stannington, after the double-stile chicane into Ringwood Lane. The Moose Head was graciously accepted by first lady Dorothy Pelly, from Ambleside, after the over-ruling of strong support for it to go to Richard Hakes.
Appreciation must be placed on record for all the hospitality received at the Royal Hotel, for Bradfield Parish Council\'s perfectly tonsured footpaths, for Mrs Harper\'s attendance at the presentation ceremony, and for access to Jones\'s Corner granted by David Sanderson of Woodside Farm.
After expenses including engraving, a pint for Eric the BPC footpath man, a bottle of whisky for DS and a small subsidy towards the chip butties, the historic Brasso tin will contain a surplus of a 2-Euro coin plus about £20, resulting from the bumper turn-out. The sterling-currency portion of this will go to DPFR funds.
Find similar results View track Download
46 starters
Click the to see results for the athlete in all results for this event, click the name for all known results for the athlete