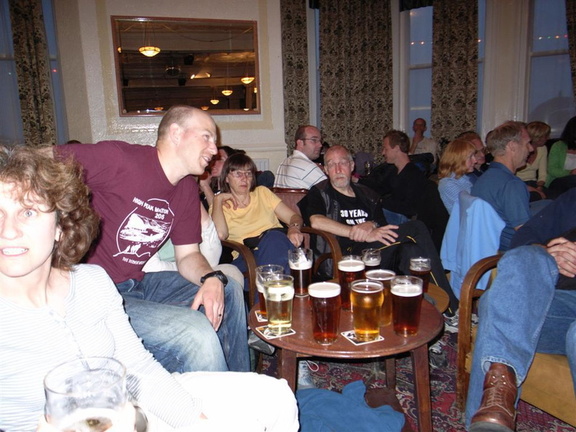 Not the Thornbridge Weekend on Saturday 28th August 2004

The DPFR camping weekend went very well & was well supported despite many of the 'regulars' not being able to make it. The weather was cool & windy but it didn't rain until Sunday after most of the tents had been taken down.Roy Smalls infeasibly large gazebo nearly took off in the high wind with several Dark Peak members hanging on to it (new hang-gliding section?) but the timely intervention of the newly fattened up Dave Holmes saved the day!

The new race course devised by Hugh Cotton was very 'runnable' & took a stud. 23 did the race & were all suitably impressed,if rather knackered. The 2 barrels of real ale that the club purchased went down very well but considerable effort had to be put in by the organiser to encourage those present to 'sup more ale' so that any suggestion of over supply was well & truely dismissed!

Despite the lack of facilities the campsite was fine & a good time was had by all.