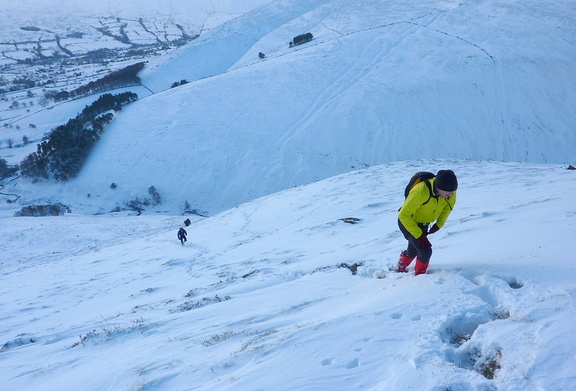 If there's one thing that Dark Peak Fell Runners, as a corporate body, dislike it is organisation. Unless, of course, its a race which gives individuals opportunities to grumble about disorganisation (e.g. Saunders MM). However, this year DPFR decided to try some organisation and appointed yours truly as acting unpaid race co-ordinator of the Edale Skyline. Acting that is, until found incompetent in which case the AGM will appoint another R.C. (no, not Roman Catholic). Peter Dyke took on the job of registration since the momentous decision had been made to make the race a pre-entry event. So this is the story of what it is like to stand in the middle and let everything revolve around one.

Planning actually started, believe it or not, in September when a number of volunteers came together in the form of an informal committee. An event which must be unique in the annals of Dark Peak. These volunteers were;
Peter Dyke - Registration and Results
Tom and Enid Foley - Farmer Liason
Chris and Diane Worsell - Timing and Recording
David Holmes - Catering Alan Yates - Marshals
Mike Browell - Trophies and Sponsorship
Jeff Harrison - Treasurer

Eventually many of those above ended up with additional jobs e.g. Tom helped with results and Enid not only did that but supervised the kitchen at one stage. I am pleased to say that DPFR members and in many cases their partners, rallied round magnificently in various helping and marshalling jobs, having been cajoled, bullied or persuaded by that professor of the Anglo-Saxon language, Alan Yates.

After many meetings the talking had to stop and the race actually started. Not long after the runners had disappeared into the clouds, it became obvious that the weather conditions were going to fulfil the forecasters' prophecy by turning from bad to worse. Even worse, it was realised that the runners would be returning in a cold and wet condition without the benefit of a hot drink. Enter Mrs Foley. Them as knows kitchens knows. Before too long Enid, assisted by Tracy Sanderson soon had everything under control and runners were able to enjoy hot drinks and soup. All this before she and Tracy returned to the jobs they had been recruited for, recording the results that were being ferried in by the messengers Chris Manthorpe and David and Jack Swindells.

Others also doubled up on jobs as many of them returned from uncomfortable spells of marshalling. Prominent in the kitchen were Colin and Sylvia Henson who took over after manning the checkpoint at Cheshire Cheese.

Peter Dyke, who could probably write a whole story about the hassle and flack he had to suffer when refusing late entries, had further problems in identifying those who had retired from the race. Often runners passed check points with numbers wet and illegible. This is a very important and time consuming job to ensure that if a runner is missing the search area can be reduced to perhaps 10 square miles.

The real heros, the marshals, were out on the hill. They acquitted themselves marvellously in cold and wet weather. It could have been worse, but not much. Not only did they man their posts they even managed to take the numbers in these atrocious conditions. Also out of doors for ages and ages were Chris and Di Worsell who were at the finishing funnel taking numbers and times. The results came in so smoothly via the messengers that Chris and Di were quite forgotten until a call for help reminded the race co-ordinator that he had promised to send help some time before.

What happened to these results you may ask. This year computer operators were at a premium so it was back to the steam age of pen and pencil. The 'computer room' became like a sauna as the heat was turned up to ensure that we had a warm safe haven for any runner with hypothermia. The results were ready for the prize giving at 2:30pm, only the race co-ordinator was not. By the time runners had gone to the 'Ramblers Rest' to roust the stragglers the prize giving was slightly delayed.

After that it was downhill all the way, like the Lord Mayors show. No doubt if the cleaners had their way dirty runners would be kept outside of the village hall and passed cups of tea (provided they did not press their snotty noses against the window). But life is not like that so the cleaning team led by Chairman Dave Holmes and assisted by the Malkin family swilled and swabbed their hearts out until Mrs Yeardley (the caretaker) pronounced herself satisfied.

At 5:20pm the race co-ordinator turned the lights out and Edale went back to sleep.