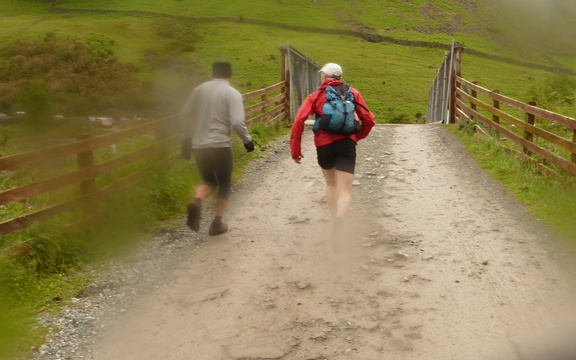 Recent heavy rains kept the ground moist and times slow (for summer). Graham Berry jumped the start but was not recalled by the starter. This was perhaps because the starter had not yet arrived as Graham had started (intentionally) 24 hours early. His time of -23:25:13 was however adjusted so Malcolm's record remains intact.
Further down the field Danny Smith, making his first appearance in a Kinder fell race, started well only to find that his Air sole road shoes weren't ideally suited to the traverse of Kinder and descent from Crookstone Knoll. It transpired that Danny had been told by his wife that he had to prove his interest in fell running by completing six races in his existing shoes before he was allowed a pair of Walshes! However, by Blackamoor (his fourth or fifth race) this condition had been relaxed following a nasty fall at Hope. Perhaps this should be adopted as a future club initiation test to rank alongside finding the Headstone on a wet winter's night without a torch. Sportsman to Cowper Stone direct (no deviations from the bearing) and the full Grindleford breakfast run.
M.P.