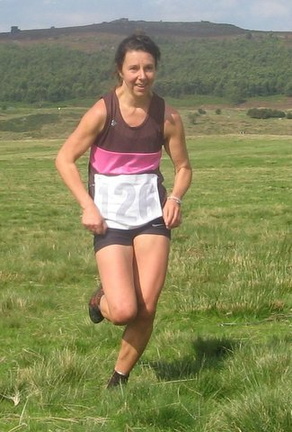 The select field enjoyed a fine afternoon's sport, savouring the refinements to the classic 'Dunghill' course which introduce tantalising glimpses of Ughill village and an extended out and back beneath the noble profile of Ughill Heights. Followers and race officials were also treated to some vintage entertainment. The housewife's favourite. Bob Berzins, looked over trained on the day and had no stomach for the grim struggle unfolding at the front of the field between those seasoned old stagers Berry, Harmer and Cartwright. Graham's wily tactics and well-judged final surge made him a popular winner adding his name to those of other immortals (Tett and Harmer) inscribed on the Granville Harper memorial trophy. Further excitement was supplied by the cavalry charge of four contesting 10th-13th place with J, Fulton Esq. beating an astounded McLewin by a nose.

A new trophy presented for the first time this year is Hiro's fan, awarded for the most imaginative walk-about. Some minor bids were made in the out and back section, but undisputed winner was John Norman for his deft side-step in the pub car park, initiating a jaunty by-pass of the 'Edwards alternative' and the field behind the pavilion, to effect a cheekily antipodal approach to the finish line.
The presentations were made by Lady Margaret Edwards, graciously substituting for Mrs. Harper who was on holiday. Polly Harmer appeared to win the junior handicap race. Rounders was cancelled owing to inclement weather conditions and a rumour that the pub was open.