Dark Peak Fell Runners
@dpfellrunners
RT @peakdistrict: Restoration works have started on the iconic #GreatRidge on #MamTor. Please be aware the path at the top between Hollin…
25d • 24/03/2021 • 13:11 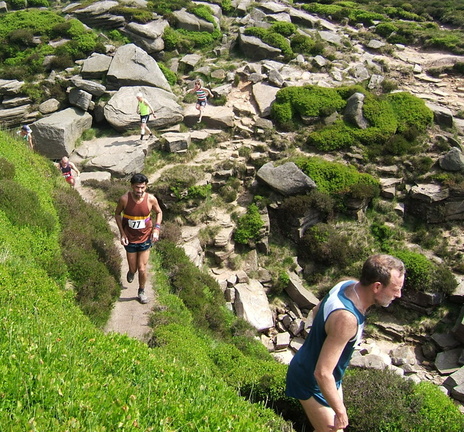 The weather was not as kind as usual but the possibility of thunderstorms didn't materialise and conditions were dry overhead and underfoot. Hazy visibility spoilt the view from the start field to Win Hill, so spectators were denied seeing much of the record field of 263 making the ascent up Hope Banks. Alistair Cory-Wright led the field up Hope Banks but soon after the turn Phil Bowler took the lead and stayed in front to register a Staffordshire Moorlands victory for the fifth time in ten years.

Veterans, as usual, provided their own race within a race with three in the first seven. Tony Hulme, a winner of the race eleven years ago was third overall and it was nice to see Ricky Wild maintaining his form of the last couple of years. He edged the consistent Graham Berry into third place by three seconds. Sylvaine Boler was first lady again; the first hat- trick of consecutive wins, although Carol Haigh won three times in 1982, 1987 and 1988. I doubt whether any men have recorded three straight wins but the inscribed base of the trophy only bears names of winners since 1979. The previous base recording winners from 1946 to 1979 (when it was an eleven man field) went missing about 1980 or 1981. We would love to have it back so if anyone knows of its whereabouts please let me know. The 1946 winner was Bateman Eyre and a winner in the 50s or 60s was Brian Ollerenshaw.