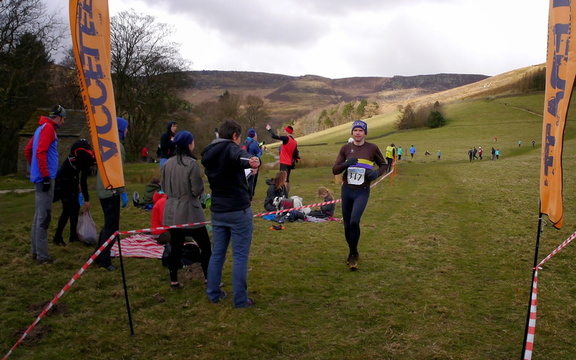 Rob Pearson didn't ring up to see if the Headstone was on but Graham and Bob seemed keen on racing and as Marjory was rather inaccessible the Headstone revival was planned. No sprint to the Three Merry Lads this one with several feet of snow to be dug through as the field bunched on the climb away from Rivelin Waterworks. The early pace away from Rivelin car park had been steady but Big Bob edged away on the road. Bob ploughed his way along the edge path but by the open ground after Wyming Brook there wasn't much in it.

Bob gambled on the conduit being clearish, I took the purist route and, after swimming and jumping my way, emerged at the Headstone some time after Bob who had hurtled off towards the haunted house. Mark Harvey, struggling early on, also made up ground along the conduit and caught up Paul who had gone direct. After wading up the hill the back road from the haunted house to Flash Farm was no easier with legs like jelly. Bob held a considerable lead and looked strong. No doubt had the Marjory taken place he would have taken some stopping.
No alternative date has yet been proposed.