James Pierce
@InvisibleJim1
Five years ago incredible scenes as we supported @NickySpinks on her #bobgraham round record attempt. This pic does…
17h • 5/04/2020 • 9:57

Dark Peak Fell Runners
@dpfellrunners
RT @peteblandsports: As we begin another month, our shop remains closed and the vans remain off the road. So online it is and another disco…
1d • 4/04/2020 • 8:47

Dark Peak Fell Runners
@dpfellrunners
@lliongerallt Its Rob Davidson, member of our running club. Good work Twitter. Follow me and I can dm you and share details
7d • 29/03/2020 • 13:04 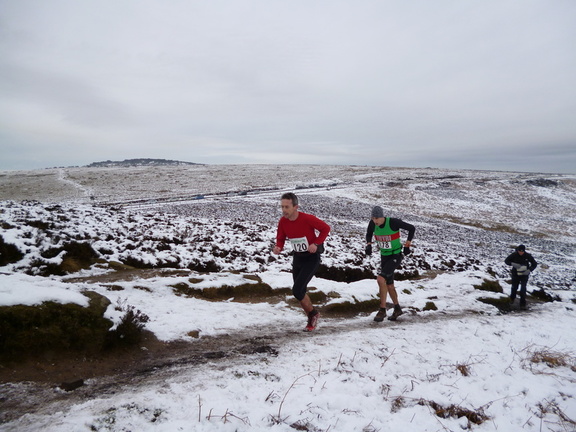 On a blustery day and with soft going on top, times were significantly slower than the records. Tim Tett had a good lead at the knoll after Mike Meysner's usual early pace. On the return Andy Harmer took up the chase and closed the gap but his efforts were not enough and Tim inflicted the first defeat on Andy over this course since 1987 (6 races ago). Claire had another fine run in 6th place but star performance must be Graham Berry's 3rd, 8 minutes faster than his 1989 time I Peter Kohn shown an amazing turn of speed on the climb (7th at the summit) but demonstrated that this is no substitute for an ability to descend properly! This was the 14th outing over the course but attempts to suggest its demise were met by the usual strength of feeling.