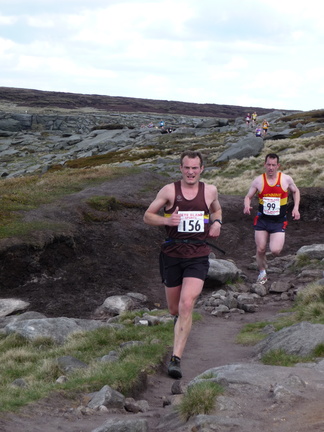 A bold and highly imaginative route choice on the first day's first leg had ended our interest in the competition as such. After that we had ambled on, more-or-less alone, without incident until we made another imaginative route choice. This was to descend about nine metres of steep icy snow to a small grass ledge. Below the ledge was not exactly a yawning chasm, nor yet a great vertical cliff, but an item of landscape that was vaguely reminiscent of both.

In the interests of historical accuracy it should be mentioned that this choice was not unanimous but a majority decision of one to one.

I began to descend comfortably enough; facing the slope, feet apart, and kicking my toes in. I encouraged Jeff to follow by displaying a cheerful, carefree insouciance that I had saved for just such a situation. At first his progress was slow, and punctuated by a succession of low, quiet, moans - a sort of private queasy oo-ers. Suddenly, when I was two thirds of the way down, Jeff's vocal commentary became loud and public and he began to descend very rapidly indeed.

Two other competitors, who were immediately below us on the grassy ledge, having selected a much more tedious route, were obviously familiar with the loud lament that Jeff had begun and joined in. This presented me with a problem because I prefer peace and quiet on the fells. As Jeff approached with ever increasing velocity, I braced myself as securely as I could and stretched out my right arm to grab him. His feet passed either side of my hand, which slid up the inside of his left leg until it encountered secure (or at least partially secure) parts of his anatomy which enabled me to arrest his movement. This coincided with the part of his lament that consisted of a piercing, high pitched scream.

Safely on the ledge I was treated to a charming little piece consisting of grateful whimpers interspersed with subtle curses. This was sung in curious style between gritted teeth and was accompanied by a background duet of murmurs about spare trousers The rest of the day passed without further incident. Jeff's behaviour was no more deviant than usual and my right hand appeared to be undamaged. Before starting the second day I checked that no change of registration was necessary to reflect the altered status of our pairing and assumed that the previous day's drama had had no (other) consequences. This appeared justified until a bizzare incident at the third control, the summit of Bin ein Beag (940m). We plodded up and stopped briefly for a bit of food and pretend to look at the map while watching where everyone else was going. About 100 metres down the rocky descent path Jeff had another burst of super rapid descent. He sat in a crumpled heap contemplating his grazes and a strange expression came over his face, as if he had seen a vision. I waited for his revelation about the ultimate meaning of life. I wondered if I was witnessing a miracle cure and he was about to speak in a different tonoue (i.e. normal pitch).

Then a little voice said, 'I've forgotton my rucksack. I left it at the summit.' It was my turn to sit down, in a different sort of crumpled heap, with a strange expression on my face. As Jeff climbed back to the summit with an air of saintly martyrdom I began to field the same question from passing teams, 'Hello Will, what are you doing?' Unable to think of a convincing explanation I settled for the truth, which nobody believed. Nevertheless, our progress thereafter was punctuated by solicitous enquiries like, 'Has everyone got a rucksack then?', or helpful comments like, 'Careful on this bit, you need a rucksack'.

Since the event Jeff has been practising diligently and now passes as normal to anyone who does not know better.