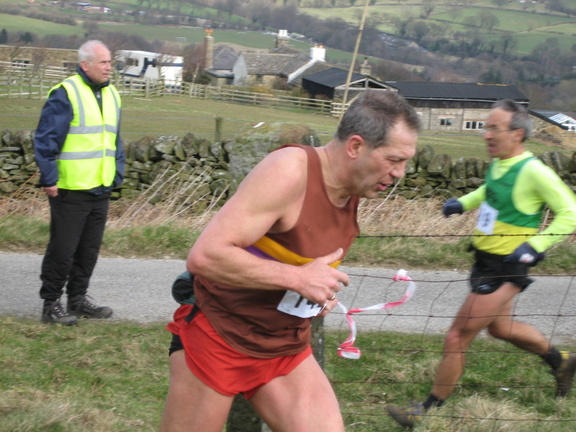 The route was in question until just before the off when it was finally decided to trespass despite problems in April. Malcolm took off towards Lost Lad and ran away to smash his 1985 record by two minutes. Although the ground was dry, Malcolm is in such great form that he left the rest standing. Billy Minto was just ahead of myself but he took the Salt Cellar alternative and added another six minutes to his time! Kev Lilley, game as ever, paid for the early pace as Mark Harvey and Bob Berzins joined him up the Pike Low climb. Mark surprised everyone by taking third after leaving the big man. The vets record remained intact as the club secretary looked subdued. Perhaps the Watershed (pl8) had taken its toll. Jonathon Cant lost his chance to take points off Graham Berry when he trailed in well down the field after pulled muscles, a result of a dog attacking his dog the previous night! Jacky was not far off Claire's record in the Ladies and was two minutes ahead of Ann.

For the first time ever the timekeeper withdrew to the car leaving Jeff Harrison adrift as the midges, always at their best after this race, proved more vicious than ever. The wholemeal cakes of bread prizes were missing this year as the organiser blamed the pressures of parenthood; is this the start of the secretary's reign crumbling?